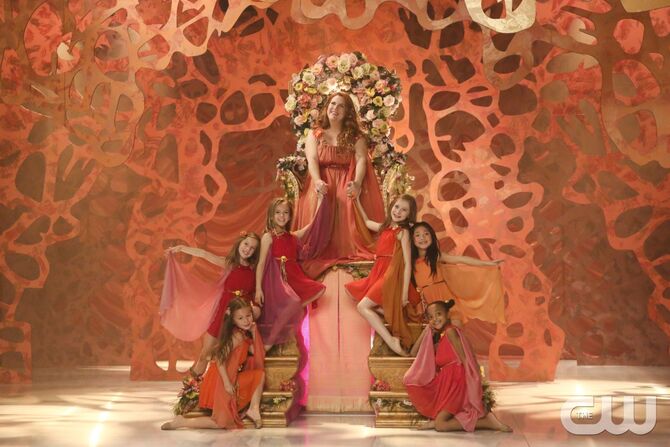 At night Rebecca is home sleeping when she has a nightmare involving Trent. The following morning, Nathaniel and Mona are shopping for furniture before moving in together. Over at the Glenn Willow Medical Center, a pregnant Heather has an appointment with Doctor Pratt a week before her due date. She is joined by Darryl, Hector, Rebecca, Paula, Valencia and Beth. Heather is fearful about childbirth but Paula reassures her the pain is worth it (♫ The Miracle of Birth ♫). Later at Whitefeather & Associates, Rebecca confides in Paula about her bad dreams about Trent. Paula apologizes for bringing him into their lives which makes Rebecca feel guilty for lying to her during their last encounter with her stalker.

Paula tells Rebecca the tracking device she put on Trent indicates he’s visiting his mom in Iowa. Later, Rebecca is still distracted when she has a meeting with Nathaniel. He lets her know he’s moving in with Mona and is throwing a party to celebrate which she’s not invited to. She congratulates Nathaniel and gets a shock when she sees an apparition of Trent. Rebecca calls an emergency meeting of her therapy group at Home Base. She believes the hallucination of Trent is a manifestation of the guilt she has for all the bad things she’s done in West Covina. Bert suggests she confess everything to those she’s wronged. Rebecca takes his advice and summons Nathaniel, Paula and Josh to the firm’s boardroom.

Elsewhere, as Heather discusses the delivery day game plan she figures out Darryl misses WhiJo before going into labor. Back at Whitefeather & Associates, Rebecca gives everyone a list which details all the ways she wronged them. Nathaniel learns Rebecca put a hit on Mona, Josh learns Nathaniel and Rebecca plotted to have his dad deported and his grandfather killed, and Paula learns Rebecca lied to her about Trent blackmailing her. Paula storms out angry at having been manipulated while Josh punches Nathaniel after he makes a flippant remark. Rebecca catches up to Paula but her friend refuses to listen to her apology. Once Paula leaves Rebecca then thinks she’s hallucinating Trent again.

She discovers he’s really there and Trent warns her he’s going to make her regret rejecting him before leaving. Rebecca is unable to use the tracking device on Trent and Paula refuses to respond when she calls her about it. The office staff is also unhelpful including George who warns Rebecca to stay away from Nathaniel. Meanwhile, a worried Nathaniel rushes home and finds that Mona is okay. Together they later go to the top floor suite the party is being held at to finish preparations. Nathaniel considers Mona for a moment (♫ Settle For Her ♫) only to have his reverie interrupted by George. At the hospital, Heather is going into labor and tells Dr. Pratt she wants drugs to help her through the birth.

Over at the law firm, Rebecca’s phone receives Instagram updates including threatening pictures from Trent featuring Nathaniel. She rushes to the event where Trent is there in disguise working as a waiter. He lures Nathaniel to a balcony on the pretense of fixing the catering bill. Rebecca arrives and runs into Tim, Maya and George before locating Nathaniel who’s oblivious to Trent holding a knife behind him. Rebecca pushes Trent over the balcony and he falls several stories into the pool below. Soon after, the police arrest Rebecca for attempted homicide while across town at the hospital Heather gives birth. Previously she had contacted WhiJo who arrives to see Darryl and his new baby.

Over at the police station, Nathaniel tells Rebecca he believes her story but that there’s no corroborating evidence to support it. He advises she give a not guilty plea due to temporary insanity and reassures her she was not responsible (♫ Nothing is Ever Anyone's Fault ♫). The next day at Rebecca’s arraignment trial most of her friends are in the courtroom. She is about to enter her plea to the judge when Paula arrives and she has a sudden change of heart. Rebecca apologizes to Nathaniel and gives a speech about personal responsibility while addressing Paula directly. She declares that she wants to be held accountable for all of her actions. To the shock of her friends she then officially pleads guilty to all charges.