Nathaniel and I Are Just Friends! 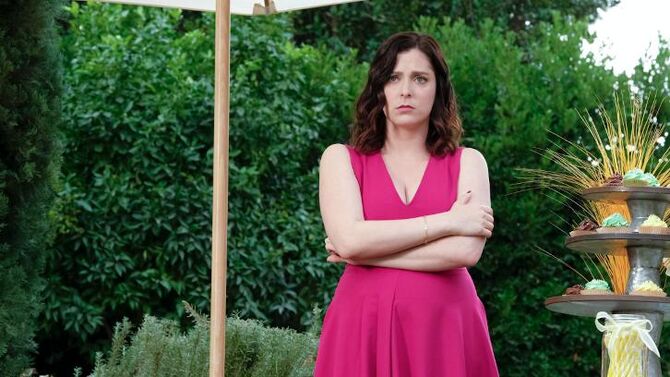 Nathaniel and I Are Just Friends!

At her home, Dr. Noelle Akopian is hopeful about her therapy session with Rebecca who seems willing to work on her issues (♫ This Session Is Going to Be Different ♫). The day of the appointment, Rebecca recapped everything that happened to her since they last spoke. She also mentions her multiple trysts with Nathaniel which she claims is over. Meanwhile, as Nathaniel has dinner with Mona he realizes he's been neglecting his actual girlfriend due to Rebecca. The following day at Whitefeather & Associates, Paula berates Jim, Tim and Maya’s incompetence. She’s hired her law school friend Sunil Odhav to have someone reliable at the firm. Over in the office supply closet, Nathaniel and Rebecca hook up again.

At Home Base, Heather brags about carrying Darryl’s child to Hector. Also at the bar are their friends: Valencia meets a client for her party planning business named Beth, WhiJo tells Josh he’s leaving town for a few months to get over Darryl, Paula’s with Sunil making fun of their co-workers while Nathaniel and Rebecca make plans for another fling. Eight months then pass from this moment: Home Base is remodeled, Heather now regrets being a surrogate as she’s in constant pain, Valencia is dating Beth, Paula is alienated from Sunil as he’s become friends with the co-workers they once mocked, WhiJo’s back from his sabbatical with a dog named Max while Nathaniel and Rebecca are still secretly having sex.

At Rebecca’s next therapy session, Dr. Akopian is critical of her patient having an affair with someone in a relationship. Rebecca points out she isn’t as obsessed with Nathaniel like she was with Josh. She also believes no one is getting hurt since his girlfriend Mona doesn’t know. Later at the law firm, Rebecca has lunch with Paula when they are interrupted by Sunil. Rebecca is amused when Paula treats Sunil poorly after he hands over paperwork she had him redo. Later, Rebecca and Nathaniel have sex in the supply closet again. This time she suggests that they drop all pretenses and embrace the casual arrangement they have. Nathaniel agrees and mentions that he’s bringing Mona to Darryl’s baby shower.

At Heather’s house, Hector tells his girlfriend to follow through on her commitment to Darryl which she voluntarily made. This causes a very hormonal Heather to cry and Hector trepidatiously reminds her about Darryl’s baby shower later that day.

At Darryl's baby shower, Paula learns that her coworkers don't like her anymore and call her the "office bitch". Later Rebecca admits Paula that she and Nathaniel are still sleeping together which prompts Paula to call her "Tanya", after the woman Scott cheated her with. Later Rebecca breaks up with Nathaniel at the firm and Paula apologizes to Sunil.

At her next session, Dr. Akopian tells Rebecca that she deserves love even though Rebecca doesn't think she's ready. She believes that she has gotten better, but that she's afraid that something bad will happen again if she tries. This leads her to think about admitting her feelings for Nathaniel so she goes to his place, but decides not to do it. (♫ Face Your Fears (reprise) ♫)