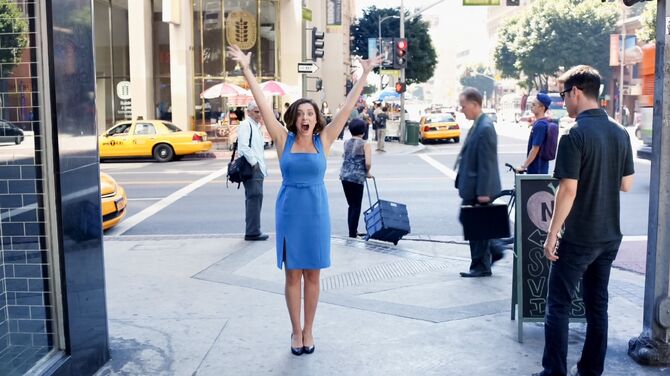 New York City is an American metropolitan area located in New York State and the most populous city in the country. The city is divided into five boroughs: Brooklyn, Queens, Manhattan, The Bronx, and Staten Island. It has been described as a significant Global Power City which has an international influence on various matters ranging from art and entertainment to finance and commerce. The city boasts various famous landmarks and districts such as The Statue of Liberty, Broadway, Wall Street and is home to the headquarters of the United Nations. Rebecca Bunch lived in New York City and worked at a prestigious law firm of Sampson & Saunders before moving to West Covina, California. It's first appearance was in the Season One episode "Josh Just Happens to Live Here!".

Rebecca Bunch was living in New York City in a fancy apartment but was depressed despite her succesful career as a real estate lawyer. Upon learning she was getting a promotion at the law firm of Sampson & Saunders she felt even more anxiety. She left the building and went to the streets to collect herself in an alley. After failing to take pills to calm herself down she prayed for a sign from God to tell her what to do. She noticed a large banner from an omnipresent Butter marketing campaign which posed a question she had seen a lot of: "When was the last time you were truly happy?" which resonated with Rebecca. A part of the sign which had an arrow malfunctioned and pointed towards a pedestrian.

Rebecca immediately recognized him to be Josh Chan, her ex-boyfriend from summer camp. He was delighted to see her and impressed with how succesful she had become. Josh explained he was in New York for the last eight months working in an office job but was unable to adjust to the rat race of the city. He was planning to move back to his more laid back hometown of West Covina, California. After he left, Rebecca took thier serendipitous reunion as the sign she was looking for. She went back to the law firm and turned down the promotion and prepared to move. After finding a job with the West Covina law firm Whitefeather & Associates she packed up her things, boarded a plane and left New York City behind for Southern California ("Josh Just Happens to Live Here!").

Months after her move Rebecca had another sudden change of heart after hearing Josh claim he didn't love her. Rebecca contacted her old law firm Sampson & Saunders and got re-hired. She made arrangements searching online for apartments in New York and buying a plane ticket. She drove to the Los Angeles International Airport and boarded the plane only to run into her therapist Dr. Akopian. Rebecca had avoided having a session with her for some time and finally gave in. However, she took sleeping pills and was knocked out not long into thier session. While unconscious, Rebecca had a dream which convinced her to change her mind yet again. After landing in New York she immediately boarded a plane back to West Covina having decided to stay there ("Josh Has No Idea Where I Am!").