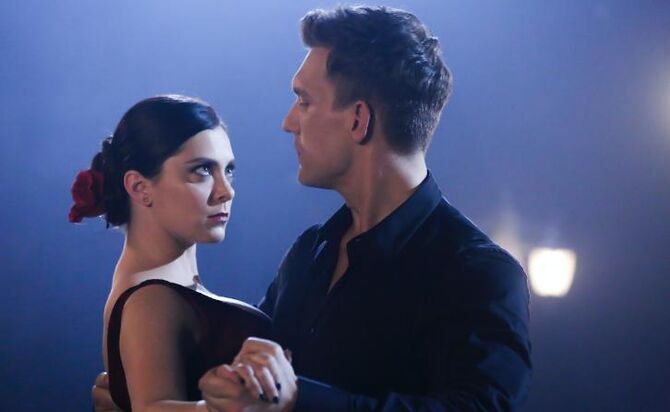 Oh Nathaniel, It's On!

The Gurl Group are eating at Sugar Face as Heather laments not being a student anymore. Rebecca disgusts Valencia when she injects a hormone shot which she needs to donate her egg to Darryl. Rebecca lies about Dr. Shin being okay with this and announces she’s returning to work. Heather and Paula question this since her boss is her ex-boyfriend Nathaniel whom she just broke up with. Later, Heather is a guest on Hector’s podcast with his mother. They are interrupted by Josh Chan who is temporarily living there at Hector’s home. At Whitefeather & Associates, Rebecca returns only to be summarily fired by Nathaniel. As they argue, Rebecca is affected by her hormone shot and quickly leaves.

She goes to the break room where she finds Paula, Darryl, Maya, Jim and Tim. She learns from them Nathaniel is seeing someone named Mona and checks his Social media. Rebecca is furious to discover he took his new girlfriend to Raging Waters. She incites a revolt amongst the staff to take back the firm (♫ He's The New Guy ♫). Meanwhile at Home Base, Kevin awkwardly tells Heather about a corporate manager training program. Sometime later at Rebecca and Heather's house, Heather dons a conservative outfit for her seminar while Rebecca discovers a legal loophole. She gathers the staff at Home Base and explains Nathaniel purchased Stacy Whitefeather’s shares of the firm in the wrong jurisdiction.

By voiding the sale and buying those shares they will have controlling interest in the firm. Rebecca goes to Stacy’s home that night and convinces her to go along with her plan in exchange for helping her litigate a noisy baby. The following day Nathaniel confronts Rebecca at her house after learning she’s suing him (♫ You Do/You Don’t Want To Be Crazy ♫). The sexual tension is palpable but Nathaniel leaves before anything could happen. At Home Base HQ, Frank tells Heather corporate loved her idea and she’s encouraged to make more suggestions. In the courtroom, Rebecca presents her case to the judge. As she and Nathaniel argue back and forth they can’t stop flirting with each other (♫ Horny Angry Tango ♫).

The judge rules in Rebecca’s favor but a problem arises. Rebecca was going to sell the Garfinkel ring to buy the shares but a jeweler tells her it’s worthless. Rebecca contacts Audra Levine’s husband Dave, actor B.J. Novak and even Dr. Phil but no one will lend her money. Heather arrives home and tells Rebecca her conflicted feelings about her corporate experience. Rebecca responds with her own problems including her jealousy of Mona. She goes to her room for more hormone injections and recieves a taunting message from Nathaniel. In a hormone induced haze Rebecca researches Nathaniel’s new girlfriend online and goes on the dark net where she possibly orders a hit on Mona.

The next day Rebecca admits to her therapy group she instigated a take over of the firm mostly out of jealousy. However, she also wanted to stick up for her co-workers and is upset she can’t buy the shares. After the therapy session, Bert tells Rebecca he’s a Bitcoin thousandaire and offers to give her the money she needs. Over at Home Base, Heather tells Chris she hates the corporate job even though she’s excelling at it. Meanwhile at the firm, Rebecca has her things moved into Nathaniel’s office. She’s a senior partner now having been given authority by the other shareholders. At Home Base corporate, Heather’s idea to the board about becoming an on-site manager gets approved.

Later, Heather tells Hector now that she’s figured out her professional life she wants him to move in with her. Hector agrees realizing its time for a change as he got a glimpse of his life after seeing his mom and Josh become best friends. Two weeks later Hector moves his things into Heather’s place while Darryl and Rebecca recieve bad news from the fertility clinic. They need a new surrogate as the one he hired couldn’t have the egg implanted since she was already pregnant. Heather overhears this and to Rebecca and Darryl’s shock volunteers to carry the baby. Afterwards at the law firm, Rebecca and Nathaniel apologize to each other for their behavior the last few weeks and end up having sex.

Retrieved from "https://cxg.fandom.com/wiki/Oh_Nathaniel,_It%27s_On!?oldid=16121"
Community content is available under CC-BY-SA unless otherwise noted.