Our Lady of West Covina 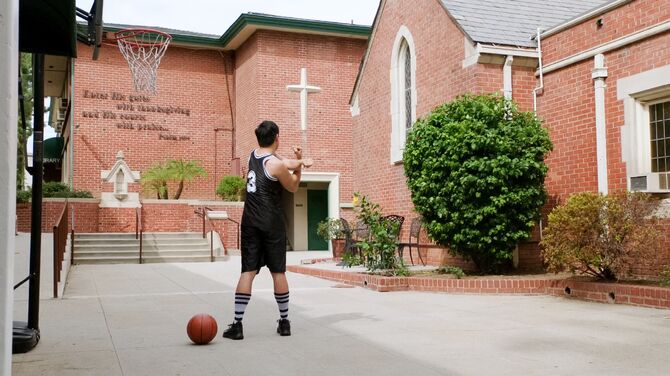 Our Lady of West Covina Place of worship
Location: West Covina, California — Debut: "Josh and I Are Good People!"

Our Lady of West Covina is a West Covina, California place of worship for people of the Catholic faith. Father Brah is a pastor there and is very popular preacher to his congregation. The building has a wall in the back courtyard bearing Psalm 100:4 prominently on its side. This overlooks an outdoor basketball court where Father Brah practices for his interfaith based league. The church's first appearance was in the Season One episode "Josh and I Are Good People!".

In 2015, local native Josh Chan went to his family's church Our Lady of West Covina looking for guidance after being criticized by his friend Greg Serrano. He went to the Confessional to see if he transgressed and was surprised to find Father Brah there manning the booth. They were old friends and Chan even gave Brah his nickname which the Father claimed helped increase church attendance. Josh told Brah about his crisis involving whether or not he truly was a good person. Brah suggested they carry on the conversation outside on the basketball court.

As they played ball Josh told Brah he was happy with girlfriend Valencia he couldn't stop thinking about his ex Rebecca Bunch. Brah told him it was God giving him an opportunity to take stock of his life. He told Josh to make a list of all his sinful thoughts and bring it to him. The next day as Brah stretched for his interfaith league game Josh returned and they reviewed his list. Father Brah told Josh his thoughts don't matter only his actions and pointed out the real problem that needed to be addressed. Since Josh acknowledged his attraction to Rebecca he needs to decide how he'll deal with those feelings ("Josh and I Are Good People!")