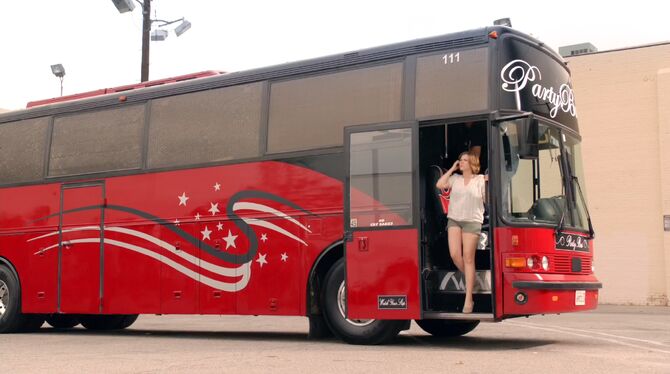 Party bus
Owned by: NA, rented by Rebecca Bunch — First Appearance: "I'm Going to the Beach with Josh and His Friends!"

Rebecca Bunch was unexpectedly invited by Valencia Perez to join herself, Josh, and his friends on a trip to the beach. She ignored Paula's warning that it was a trap and insisted she just wanted to become part of that crew. To try and impress them she took Darryl's advice and rented a Party bus to transport everyone to the beach. Rebecca found herself the odd person out when Valencia spent the trip cuddling with Josh and Greg invited his new girlfriend Heather. Rebecca attempted to bond with White Josh but was bored by his discussion of his work out routine. In desperation she invited her boss Darryl Whitefeather onboard the bus. He had followed them all to the beach in his car which had broke down.

However, he and White Josh hit it off leaving Rebecca alone once more as she saw Valencia snuggling with Josh. Taking this as some unspoken challenge, Rebecca used a stripper pole installed on the bus and performed an overtly sexual dance (♫ Your Love Is My Sugar ♫). Valencia was happy with what happened as she expected Rebecca to make a fool of herself and prove she had romantic intentions toward Josh. Rebecca told her that wasn't the case and started rattling off names of guys she hooked up with who weren't Josh. This included Greg which seemed to bother Josh a lot much to Valencia's displeasure. Having created a tense atmosphere, Rebecca retreated to the bus's restroom.

She called Paula who refused to help when Rebecca wouldn't admit her feelings for Josh. Rebecca returned to the party area and found Greg and Josh about to fight. Valencia put the blame for this on Rebecca and asked her the real reason she moved to West Covina. Rebecca claimed it was because she got a job offer only to be corrected by Darryl who stated she came to him looking to be hired. Rebecca was forced to confess the partial truth: Her life in New York was miserable. When Josh hold her about his hometown she decided to relocate and because it sounded crazy she lied. During her explanation the bus finally reached its destination and everyone disembarked except for Rebecca and Josh.

Josh told her he didn't think her reasons for moving were crazy and completely understood why she left New York City. Having spent some time there himself he knew first hand how exhausting that life could be. Josh told her he was proud to be the one who introduced her to West Covina and was happy to have her here now (♫ West Covina (reprise II) ♫). After he left to join his crew, Rebecca got off the bus where she was greeted by Paula who had come to pick her up. She told Paula what happened and finally admitted to her friend that she loved Josh ("I'm Going to the Beach with Josh and His Friends!").