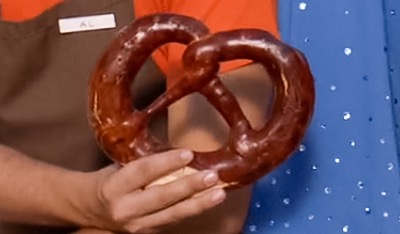 A Pretzel is a baked product generally in the form of a twisted knot or stick and flavored with salt. It was featured prominently in the pilot episode of the series both as an actual food and also as a large symbol of the setting of the West Covina. There is also a web exclusive CW fan Q&A series featuring the cast of "Crazy Ex-Girlfriend" called "Soft Pretzels". A pretzel was first seen in the Season One episode "Josh Just Happens to Live Here!".

After leaving New York City and moving to West Covina, California, Rebecca was exploring her new home. Secretly she was hoping to run across her ex-boyfriend Josh Chan, her true reason for being in town. While she was sight seeing she imagined being in a grand musical number along with a few of the people she encountered (♫ West Covina (song) ♫). One such person was a pretzel vendor whose kiosk sold novelty oversized versions of the snack. She discussed with him in detail the supposed reasons for her impulsive move to the West coast. He in turn was confused by her and the one sided conversation in which he couldn't get a word in edgewise.

While she continued to talk a long line of people formed behind her waiting for their turn to purchase a pretzel. Rebecca started to become defensive about her actions thinking everyone was judging her and nearly had a nervous breakdown. However, she pulled herself together and continued to imagine she was in a big musical number. In her delusions she imagined a large crowd gathered to join her for the big finish of her performance. The pretzel vendor made an appearance as well along with a few other people she had met. To cap off the song, a giant sized replica of a pretzel was lowered behind her as she sang. Rebecca took a seat on the pretzel and was raised high above the crowd to deliver an exciting finale ("Josh Just Happens to Live Here!").

Rebecca's co-worker Jim Kittsworth decided to quit being a lawyer and open up a Pretzel Central franchise located in the lobby of the firm's building. Rebecca herself was tired of being a lawyer and joined Jim as an employee of his new enterprise. Unfortunately due to a few ideas Rebecca introduced to the shop which weren’t approved by corporate the franchise was shut down. Jim returned to being a lawyer but Rebecca decided to buy the pretzel shop and reopen it as "Rebetzel's Pretzels" ("I'm On My Own Path").