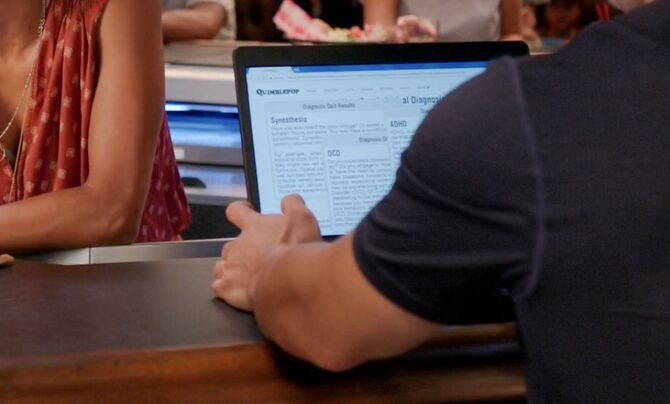 QuimblePop is a popular website with a variety of content that includes quizzes, listicles, recipes, and even shows. As it covers many different subject matters some have used the site as a research tool. The websites first appearance was in the Season Four episode "I Want To Be Here."

At Home Base, Josh takes a quiz on QuimblePop to determine what mental disorders he has, it’s there he also gets a quiche recipe. Hector casts aspersions on the reliability of QuimblePop quizzes, saying that he took a quiz to determine which "Sex and the City" character he is and was told that he is Miranda; he believes he should be Carrie, but Heather insists he is a Charlotte. Hector also gets a ceviche recipe from QuimblePop. Josh tells Heather and Hector that QuimblePop now produces original content, including a show called Terrier Chef. Rebecca mentions in a later scene that she watches Terrier Chef but has fallen behind while in jail ("I Want To Be Here").

Rebecca mentions to Darryl that she prepared to babysit Heabecca by printing out a QuimblePop listicle of 37 ways to calm a baby ("I Can Work With You").