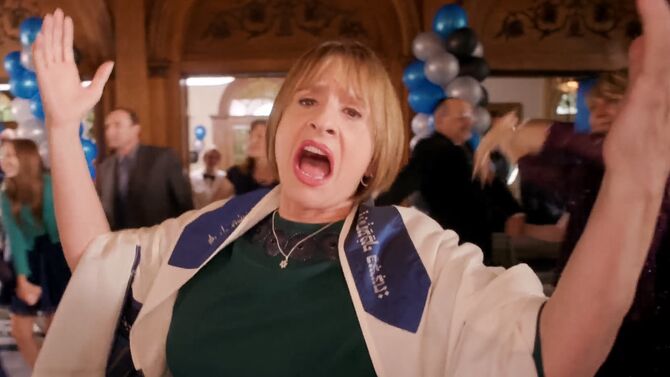 Rabbi Shari is a spiritual leader of a synagogue in Scarsdale who knew Rebecca Bunch since she was a child. When Rebecca was an adult Shari oversaw her cousins Bar Mitzvah. While she was there she also imparted some insightful advice to Rebecca who took it to heart . Her first appearance was in the Season Two episode "Will Scarsdale Like Josh's Shayna Punim?". She is portrayed by veteran Broadway star actress Patti LuPone.

In 2016 Rabbi Shari officiated over Rebecca Bunch's cousin Skyler's Bar Mitzvah. Skyler's mother Ellen invited her many relatives and acquaintances which included his aunt Naomi Bunch, her daughter Rebecca who brought her boyfriend Josh Chan. Also invited was a longtime family friend Audra Levine and her husband David. Skyler performed the Kiddish in which he read from the Torah a passage involving menstruation and lepers. This was the same one his cousin Stewy recited where he talked about his sister's cotex. Afterwards Rabbi Shari and everyone else went to a celebration held at a fancy Scarsdale dining hall. Shari caught up with Rebecca and asked her if she found a Temple in California to attend.

She was unfazed when Rebecca told her it wasn't a priority since she didn't believe in God. In response Shari simply complimented Rebecca for always questioning which was true to the spirit of her faith. Sometime later, Rabbi Shari announced to the party goers that a Hora was to be performed in honor of Skyler. Everyone enthusiastically participated except for Rebecca who didn't take part as she was in a bad mood (♫ Remember That We Suffered ♫). This was noticed by Rabbi Shari who sought Rebecca out afterwards. Shari found her alone on the steps sulking and asked what was the matter. Rebecca replied that she wanted Josh to see how miserable things were here but instead he was having fun.

Rebecca hoped to show Josh that everyone here was as depressed as she believed misery was coded into Jewish people's DNA. Shari told Rebecca she alone is responsible for her own happiness. If she doesn’t like her religion, family, friends and hometown it means she actually hates herself. Rebecca had hoped being with Josh would make her happy but Rabbi Shari pointed out that's a lot to put on just one person to fix her problems. She added that idea of such a happy ending is just fantasy. After returning to West Covina, California Rebecca took Rabbi Shari's advice to heart and brought it up at her therapist at her next session ("Will Scarsdale Like Josh's Shayna Punim?").