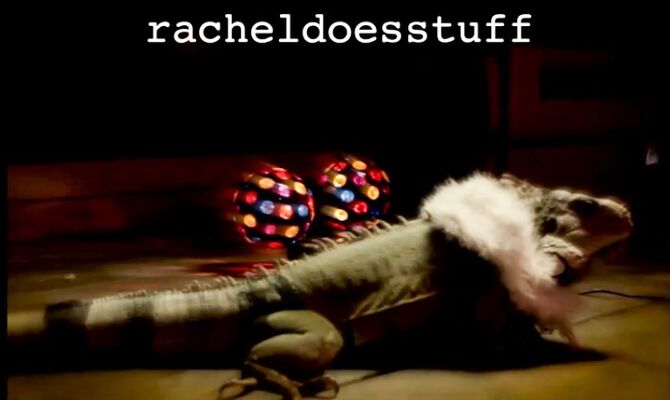 "racheldoestuff" was originally a YouTube channel started by Rachel Bloom where she uploaded comedic music videos she produced, wrote and performed. The content caught the attention of Aline Brosh McKenna and together they co-created the show "Crazy Ex-Girlfriend". The name of the channel would also be used for Bloom's official website and would eventually also serve as the title of her production company. It's under that name she produced Season Two of the show alongside McKenna's own company "LeanMachine". The logo features an iguana wearing a fur. At the end of 2016 racheldoestuff created a total of 13 episodes of "Crazy Ex-Girlfriend".

"racheldoesstuff" the YouTube channel was launched on August 15, 2010 with the debut of the video "F*** Me Ray Bradybury". The video was a success going viral and received over three million views. This and other videos on the channel were seen by Aline Brosh McKenna who got in touch with Bloom to team up with her on an idea she was working on. Their collaboration together resulted in the creation of "Crazy Ex-Girlfriend". The YouTube channel now has official music videos from the show with a few explicit versions not suitable for primetime. The channel can be viewed HERE.

"racheldoesstuff.com" is the official website of Rachel Bloom. It has announcements about her upcoming live performances and promotion for the television show. It also serves as a social media hub with links to Rachel Bloom's Twitter, Instagram and YouTube accounts. The website can be seen HERE

"racheldoesstuff" production company was apparently formed at the start of Season Two's production in association with the Blacklamb company as they appear on the same title card. So far it has produced 13 episodes of the show. It's IMDb page can be seen HERE.