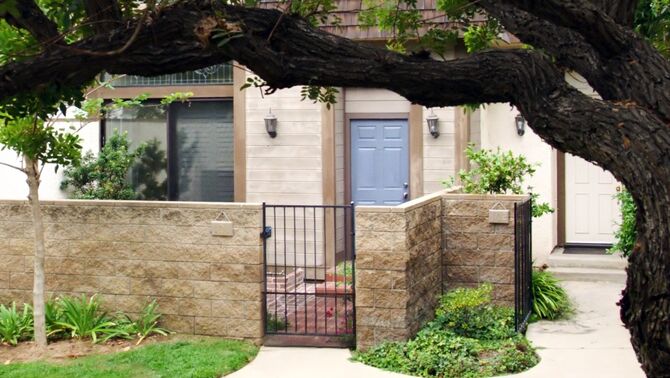 Rebecca's apartment is a part of a townhouse residence rented by Rebecca Bunch which she initially lived in after moving to West Covina, California. It was one of her first of many expensive purchases she made when relocating from New York. In her second year she moved into a house with Heather Davis as her roommate. It's first appearance was in the Season One Episode "Josh Just Happens to Live Here!".

After deciding to move to West Covina, one of Rebecca's first priorities was finding a place to live. She was given a tour of a townhouse by the local area's top realty company Muller & Hernandez. Later, she bothers a worker moving things into Rebecca's apartment by denying the true reason she moved to California. She spent her first night in her new apartment composing a text message she sent to Josh letting him know she's in town. She stayed up waiting for a response but received none. The next day she was invited by Greg Serrano to a house party Josh was supposed to be going to. After several grueling hours preparing in her bathroom preparing for the event. Greg later showed up at her place to pick her up and complimented how she looked ("Josh Just Happens to Live Here!").

After unsuccessfully getting into a local nightclub Rebecca returned to her apartment and watched TV. When she ran out of aspirin she went to a grocery store to pick up some more. It's there she met Josh's girlfriend Valencia Perez with whom she eventually formed a friendship. She was even invited to Rebecca's apartment where they bonded over a bottle of wine together ("Josh's Girlfriend is Really Cool!"). The relationship didn't last long once Valencia found out Rebecca and Josh used to date. Valencia forbade Josh from seeing her so Rebecca resorted to sabotaging her apartments garbage disposal as an excuse for him to come over. In order to create a buffer he brought his friend Josh Wilson with him.

Sometime later once they left, Paula was at the apartment and convinced Rebecca throw a party to get some alone time with Josh (♫ Face Your Fears ♫). Rebecca did as she suggested but she was embarrassed when Josh got to the party and saw only a handful of people showed up. However, once Paula managed to recruit a crowd of party goers the event became a huge success ("I Hope Josh Comes to My Party!").

A month after hooking up with Rebecca at his sisters wedding Josh was now living at the apartment. He was also in a non-commited sexual relationship with Rebecca despite the co-habitation. Rebecca hoped it would become something more official and even gave Josh his own space to make him comfortable. However, Josh still insisted on sleeping on the couch to keep things less complicated. One night he had a nightmare about Greg calling him out for betraying thier friendship. This caused him to move out and in desperation Rebecca went in an ill-fated quest to trackdown Greg so he could give them thier blessing. Josh would eventually moved back in as he was embarrassed by the prospects of having to stay with his parents ("Where Is Josh's Friend?").