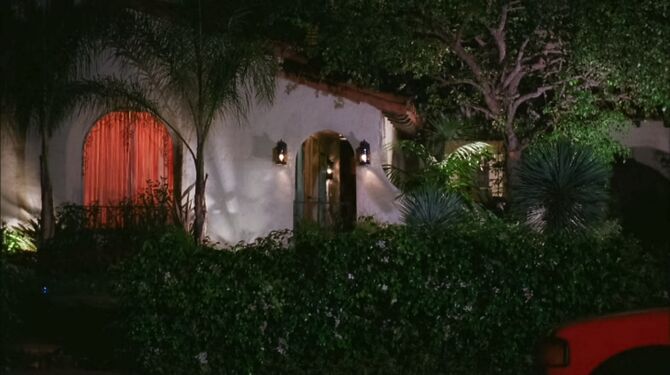 Rebecca house is a one story Spanish style home that's the current residence of Rebecca Bunch which she once shared with her friend Heather Davis. It was formerly the site of several murders involving drug dealers and had been recently renovated. Eventually Heather moved out of the house after getting married and buying a condo in El Sugondo leaving Rebecca the sole occupant. It's first appearance was in the Season Two episode "Who Needs Josh When You Have a Girl Group?".

In 2016, Rebecca Bunch was rejected by Josh and Greg and needed to move out of her apartment as it held too many memories of both men. At the same time Heather Davis got a financial windfall and decided to move out of her parents house. Much to Rebecca's surprise Heather declared they were getting a place together. Heather needed a co-signer and Rebecca needed someone to help her make better choices ("When Will Josh and His Friend Leave Me Alone?"). After they found a place to move into Paula was one of first visitors to Rebecca and Heather's house. Paula was invited for a tour and recognized the renovated house was a former crime scene but didn't tell her friend.

Rebecca threw a surprise get together with Heather and Valencia in the hopes that Paula would join thier girl group. However, the festivities began poorly with awkward conversation and a sex toy presentation hosted by Karen. It continued to get worse as a portion of the bathroom ceiling collapsed. This wound up trapping Paula inside the bathroom (♫ Stuck in the Bathroom ♫). While they waited for emergency services to arrive at the house, Rebecca learned Paula earlier had texted her friend Sunil Odhav. She told him to rescue her from the party by making up an emergency. Another unexpected vistor was Trent Maddock who managed to free Paula by lifting the debris of the bathroom's ceiling.

Rebecca confronted Paula about her behavior resulting in some uncomfortable truths coming out that created a rift between the two former best friends. The evening come to a close was with Maya and Darryl barging into the house to do a dance routine (♫ We Gonna Keep it Rolling ♫). Once they were done, Darryl everyone was stunned and he assumed they wanted to learn how to do the dance. He then recognized the house as the site where a bunch of drug dealers had been killed. Afterwards, Rebecca was in her bedroom depressed about her fight with Paula when Trent showed up and she decided to sleep with him to make herself feel better ("Who Needs Josh When You Have a Girl Group?").

Sometime later, Rebecca, Heather and Valencia were at the house sitting at the kitchen table each on seperate laptops. Both Rebecca and Valencia checked Josh's Instagram account at the same time and discovered he had a new girlfriend named Anna Hicks. Although Heather warned them not to they continued to research Anna for three days straight ("Who's the Cool Girl Josh Is Dating?").