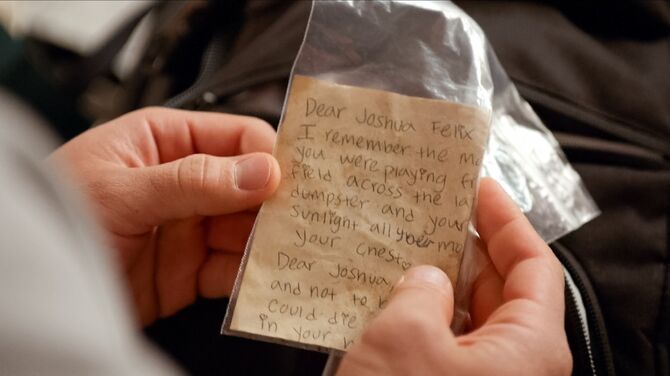 Rebecca's love letter A missive Rebecca wrote to Josh when they were teens
Owned by: Josh Chan — First Appearance: "I'm Back at Camp with Josh!"

Rebecca's love letter was written by a teenage Rebecca Bunch in 2005 to her then boyfriend Josh Chan. Unfortunately, circumstances did not permit her to give him the letter when she had intended. It would be over a decade later until Josh finally received it. The letter's first appearance was in the Season One episode "I'm Back at Camp with Josh!".

In the summer of 2005, Rebecca Bunch and Josh Chan dated each other while they were teenagers at summer camp. Rebecca wrote a heartfelt love letter expressing to her boyfriend the depths of her feelings for him. However, he broke up with her on the last day of camp before she could give it to him. Afterwards she was torn with what to do with the letter and tried several times to either mail it to him or destroy it outright. It wasn't until ten years later in 2015 that the letter finally got delivered. Rebecca had moved to Josh's hometown of West Covina, California to win his heart through various schemes. One such attempt saw Rebecca volunteering alongside Josh at a camping trip for troubled teens.

It was the perfect chance to relive thier camp romance and for Rebbeca to finally give Josh the letter. Paula believed it was a bad idea but Rebecca ignored her and when the opportunity arose she read Josh the letter amidst a romantic backdrop (♫ Dear Joshua Felix Chan ♫). She was humiliated when Josh didn't take the letter seriously and instead found it to be hilarious. Rebecca pretended not to be hurt by his reaction and rushed off for a seminar she was to give. Before she left she tossed the letter in a trash can which was noticed by Josh who retrieved it out of curiosity. He later went to the seminar and found Rebecca who had just been given a makeover by a few of the teenage girls in attendance.

He asked Rebecca if he could speak to her alone and they went outside to talk by the campfire. When Josh told her he read the entire letter Rebbeca was embarrassed and tried to excuse it as a result of her past teenage hormones. She was surprised when Josh said he was genuinely moved by it, particularly the part where she said she believed in him. He asked if he could keep the letter and when she agreed Josh thanked her with a kiss on the cheek. Afterwards Josh went home to his apartment and considered the letter when he was unpacking his things. The letter gave him the courage to stand up to Valencia when she criticized him for volunteering at camp ("I'm Back at Camp with Josh!").

Josh held on to the letter for weeks always keeping it on him at all times. When he learned that Rebecca and Greg were sleeping together he felt conflicted. On his sister's wedding day he told Rebecca his concerns about her dating Greg whom she attended the event with. He also had an argument with Valencia about her and Tita Myrna manipulating him with a treasured family heirloom. It resulted in Valencia breaking up with Josh as she was tired of waiting for him to commit. Josh then texted Rebecca and they drove to a secluded hilltop where he confessed his attraction to her. When he showed her he still had the letter the romantic gesture won her over and they had sex ("Paula Needs to Get Over Josh!").