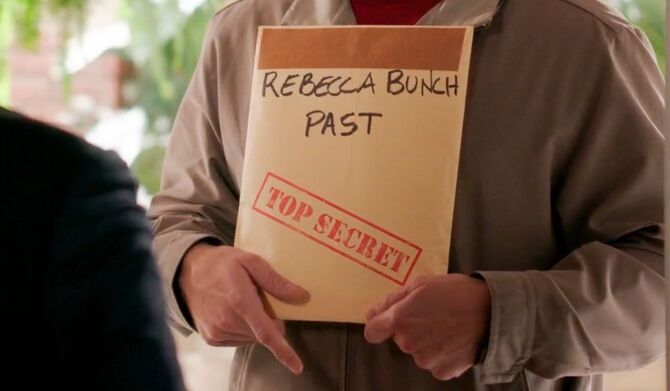 Rebecca Bunch’s file was a folder containing in detail a past scandal in her life. Trent Maddock obtained the documents illegally and gave it to Josh Chan in order to drive a wedge between Rebecca and her fiancée at the time. It’s first appearance was in the Season Two episode “Can Josh Take A Leap Of Faith?”.

In 2016, Rebecca Bunch got engaged to Josh Chan and they were to be wed only two weeks later in a hastily arranged ceremony. Trent Maddock, Rebecca’s former Harvard University classmate and ex-lover, was angry after having learned this ("Is Josh Free in Two Weeks?"). He travelled to Massachusetts and bribed a government office worker into giving him Rebecca Bunch’s file. Trent then went back to West Covina arriving on the day of Rebecca’s wedding. At her house he ran into Josh and handed the file over to him hoping its contents would derail upcoming nuptials.

Josh already had an idea of a part Rebecca’s past involving a scandal at a Harvard which Trent all heavily hinted the file contained. This only exacerbated doubts he was already having. He went to see Sara but realized he was repeating the same patterns of going to a pretty woman to solve his problems. Josh then went to the wedding venue but after reaching the entrance gates he drove slowly away in his Toyota 4Runner. He decided to join the priesthood and upon reaching the Seminary tossed the files into a garbage can without having looked inside of it ("Can Josh Take A Leap Of Faith?").

Josh decided to drop out of seminary feeling after learning Rebecca had lied and manipulated him. He announced his return to West Covina on social media and went to Home Base. He met his friends Hector, WhiJo and Chris learned Rebecca started a smear campaign against him by publishing an online article lying about his behavior. He immediately searched his trunk and found the file which he retrieved from the trash. He took it to Father Brah who read the files which detailed Rebecca’s scandal at Harvard, her affair with her professor, being charged with arson, her subsequent expulsion and institutionalization .

Father Brah called Paula Proctor and asked her to meet with him about the revelations they uncovered about her friend. Paula was shocked to learn Rebecca had been commited it a mental ward. She called Heather and asked that she stop Rebecca from leaving the house. Paula also contacted Darryl Whitefeather and Valencia Perez and told then to meet up with her there. As she suspected, Rebecca was planning on leaving town. Paula arrived at Rebecca’s house and managed to catch Rebecca before she ran way with Nathaniel. She showed the file to Rebecca and declared they needed to talk ("Josh Is a Liar").

The impromptu intervention didn’t go well as Rebecca lashed out at everyone and stormed out of her house. Nathaniel was confused as to what just happened and Paula tossed him the file to get him up to speed. He stayed at house reading up on Rebecca’s past as the others went out searching for her. Nathaniel called George over for moral support interrupting a date he was on. He was taken aback by the contents of the file realizing he didn't know Rebecca as well as he thought ("Josh’s Ex-Girlfriend is Crazy."). After Rebecca attempted suicide she began outpatient therapy until finally recovering enough to see Dr. Akopian again. Akopian had a copy of Rebecca’s file which she briefly looked over again before seeing her patient ("Nathaniel and I Are Just Friends!").