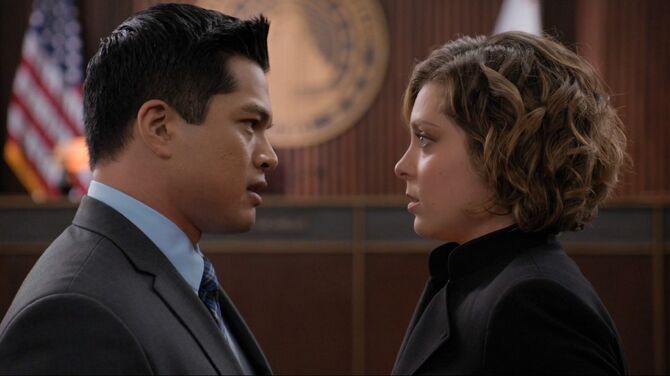 Rebecca and Josh were boyfriend and girlfriend during the summer of 2005 when they were both sixteen years old and attending Camp Canyon Grove. After he dumped her on the last day of camp they didn't see each other for another ten years. A chance reunion was enough to convince Rebecca to abandon her life in New York and move to his hometown of West Covina, California to chase after him. She spent several months trying to steal him away from his girlfriend Valencia Perez but eventually realized how unhealthy her obsession was. However, once Josh broke up with Valencia he immediately went to Rebecca and they became lovers again. Josh would eventually propose to Rebecca but on their wedding day he left her at the altar to become a priest. Their first appearance together was in the Season One episode "Josh Just Happens to Live Here!".

Both Josh and Rebecca have an idealized version of each other not completely rooted in reality. Josh is in awe of Rebecca because she is smart and professionally successful. As pointed out by a confidant of his, Josh is flattered by Rebecca's devotion, admiration and attention. In Rebecca's case, while she is attracted to Josh, her feelings for him are mostly rooted in a romantic fantasy she's had since she was a child. She believes that not only is Josh her one true love but that being with him will somehow make her happy. Her preoccupation with winning his affections has caused her to overlook Josh's relative immaturity and frequent indecisiveness. Josh in turn has a similar blindspot towards Rebecca and cannot or will not to see the depth of her obsession. Rebecca's devotion does have a positive affect on Josh as it encourages him to believe in himself more. Josh will often do the same for her believing in Rebecca while others remain more skeptical. However, given that the root of their beliefs is in those idealized versions of each other this can be seen as a negative as well furthering any unrealistic expectations they have of each other.