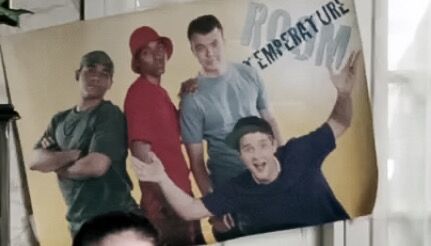 Room Temperature was Rebecca Bunch's favorite boy band when she was just a girl. It was a group made up of four multiethnic young males that was popular at the time. Rebecca was such a fan that's she hosted a Room Temperature PPV party at her house. The party led to a very traumatic moment in her life which haunts her to this day. The first appearance of the band was in the Season One episode "I Hope Josh Comes to My Party!".

When Rebecca Bunch was twelve and living in Scarsdale she was a huge fan of a four piece boy band Room Temperature. When she learned a live performance was being presented on PPV Rebecca decided to host a party around the event. She gave out invitations to everyone at school but on the day of the concert only three classmates showed up. Nevertheless, Rebecca was excited and hung a miniature poster of the Boy band next to the television. Her guests were less than enthusiastic about the concert and Rebecca made a joke about their tepid response. They only reacted after they overheard her parents Naomi and Silas Bunch arguing in the next room. Silas mocked his wife by saying she couldn't throw a decent party for Rebecca and her loser friends.

Naomi yelled at him to call his whore and ask her how she would make the party better. Rebecca unsuccessfully tried to cover up her parents domestic spat by saying they were rehearsing for a play. Her father abruptly left the adjoining room and was about to leave when he spotted Rebecca. He walked over, kissed her on her forehead and wished her good luck before leaving the house for good. She and her guests witnessed her mother yell after Silas. With the Room Temperature PPV now completely forgotten about, Rebecca tearfully pleaded with her classmates to keep what just happened to themselves. Many he years later Rebecca was an adult living in West Covina and recounted this story to her friend Paula Proctor.

Paula at the time was trying to convince her to throw a house party. Paula believed it was the only way Rebecca could get spend time with her ex-boyfriend Josh Chan whom she was trying to win back. After being convinced (♫ Face Your Fears ♫), Rebecca threw the party but again wound up with a handful of guests. She had flashbacks to her childhood and worried Josh would leave just like her father did upon seeing such a pathetic gathering. Her fears were unfounded as Josh was not only understanding of the situation but also helped improve the festivities. When Paula arrived with more guests the party turned out great and Rebecca imagined Josh performing as a four piece boy band (♫ A Boy Band Made Up of Four Joshes ♫) ("I Hope Josh Comes to My Party!").