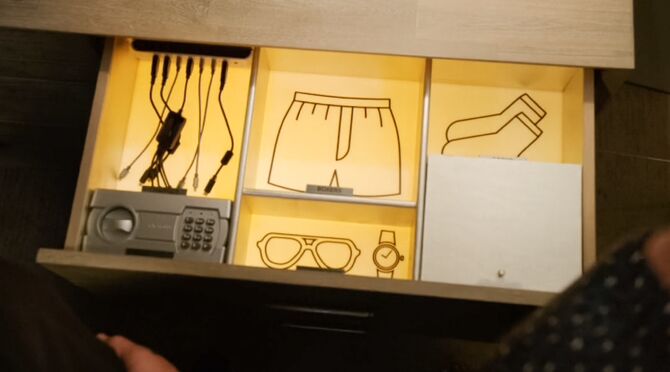 The Scott Joplin drawer was a specially made storage compartment in Rebecca Bunch's apartment. She had it crafted to hold her (at the time) significant other/roommate Josh Chan's personal belongings. It was so named because whenever the drawer was pulled out the melody of the song "The Entertainer" by Scott Joplin was played. The drawer itself was segmented into specific areas: there was a place for Josh's underwear, his sunglasses and socks. A small safe was also there as was a place to charge several of Josh's phone or other mobile devices. It's first appearance was in the Season Two episode "Where is Josh's Friend?".

Rebecca and Josh entered into an undefined friends-with-benefits type relationship after they had a tryst at his sister Jayma's wedding. At the time Josh got dumped by his long time girlfriend Valencia and moved out of their apartment. He stayed at Rebecca's home until he could find his own place. Rebecca offered him a drawer in her dresser bureau where he could keep his things. However, the Scott Joplin drawer had a sweatshirt in it owned by Greg from when he and Rebecca were together. Despite his initial trepidation he put his things in the drawer which Rebecca believed to be a huge milestone in their relationship.

She had the drawer customized and upgraded with a few special features. Josh was a bit put off by this extravagance but did appreciate a compartment containing a pair of handcuffs. After they had sex Josh went to sleep on the couch where he had a nightmare about Greg. In it his friend berated him for betraying him by sleeping with Rebecca. After waking up a Josh was so rattled he grabbed his things out of the drawer unwilling to stay at Rebecca's place any longer. Before Josh left he told Rebecca they couldn't be together until they tell Greg about them. The next day at work Rebecca she pleaded with Paula to help track down Greg.

She told her what happened and sang an improvised song based on the drawers melody. Darryl and a White Josh interrupted their discussion and Rebecca learned her boss not only gave his boyfriend a key to his apartment and an entire dresser not just a drawer. She convinced Paula to track down Greg and found out he was attending Alcoholics Anonymous meetings for his addiction. She decided not to tell Greg about her and Josh while he was recovering. When she went home she pulled out Josh's drawer and sang along to the melody only to be surprised when he showed up on her doorstep ("Where Is Josh's Friend?").