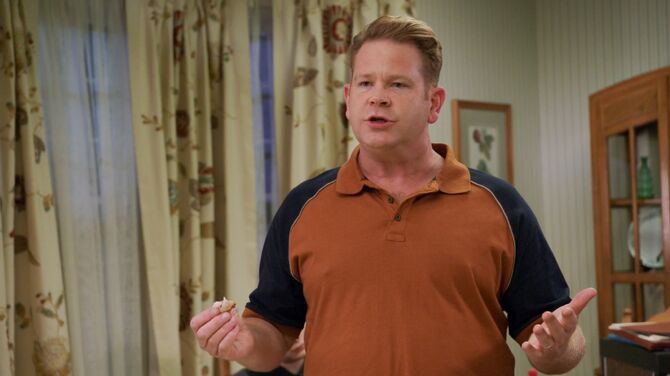 Scott Proctor is the husband of Paula and father to Brendan and Tommy. His marriage to Paula was going through a rough patch recently but he has taken significant steps to repairing thier relationship. He is currently a member of the "West Brovinas" barbershop quartet alongside his friend Hank. They compete with the two other members in local singing competitions. His first appearance was in the Season One episode "I Hope Josh Comes to My Party!". He is portrayed by actor Steve Monroe.

In 2015 at the Proctor residence, Scott Proctor was practicing his barbershop routine in the kitchen. He was focused on preparing for an important singing competition he had coming up against a Glendora acapella group. Paula interrupted him when she asked about a white table cloth she was looking for. Scott replied he gave it away to Good Will after she asked him to clean out the cabinet. Paula was upset and pointed out that the table cloth was a gift from thier wedding. She asked Scott if she told him to throw out the recyclables if he would then get rid of their wedding photos since they are partly made of paper. Scott was confused by her question and did not pick up on her sarcasm ("I Hope Josh Comes to My Party!").

On Thanksgiving day, Scott and Paula hosted a family dinner with thier kids and a few relatives. Scott reprimanded Paula when she was watching something on her cell phone in the kitchen instead of sitting with the family at the table. When she joined them Scott asked everyone to participate in a moment of silence since this was the first Thanksgiving without Aunt Judy. He was bothered when he thought he heard Paula asking him why and reminded her Judy just passed away ("My First Thanksgiving With Josh!"). Shortly afterwards, Scott was surprised when Paula told him she wasn't happy with thier marriage and insisted they get some counseling. Uncomfortable with seeing a licensed therapist, Scott took Paula to a counseling session with Father Brah.

Paula insisted they were fine despite what she told Scott earlier but Brah told her ignoring problems would make it worse. Brah suggested Scott and Paula have a dinner date together without the kids. They followed his advice but the meal was awkward since they had grown so distant. Afterwards Scott was concerned when Paula received a call and was going to go out. He demanded to know what was going on but Paula refused to answer and to allay his suspicions invited him to tag along. They headed to the home of a lawyer at Paula's law firm where he was told to find a rock they could throw through the patio door. Excited by the Cloak & Daggeresque misadventure they were on, Scott had to use the bathroom and went inside the house to pee.

Once he finished he went back outside and had with him a rock he found. At Paula's urging he tossed the rock through the patio door shattering the glass. He and Paula quickly ran back home giddy over the succesful caper they just pulled off. When they got home Scott and his wife were far more comfortable around each other. He admitted he nearly had an affair with a co-worker as did Paula who mentioned her time with Calvin Young. The two of them continued to bond then while discussing her co-worker Rebecca Bunch's love life. Scott was amused at the situation as Paula described her friends backstory ("Crazy Ex-Girlfriend Theme Song"). Scott finally taking an interest in something Paula was into rekindled a fire between them and had sex ("That Text Was Not Meant for Josh!").

Months later Scott and Paula were in a much better place in thier marriage. They were even being more adventurous in the bedroom as Scott had ordered a sex swing from Amazon.com. Despite this, Paula felt there was still a void in her life but assured Scott it had nothing to do with him. She mentioned missing the rush of her misadventures with Rebecca but acknowledged she shouldn't do that anymore. Scott suggested she find something that she enjoyed doing just as much such as writing legal briefs and stick with that. Paula considered his words and decided to enroll in law school to become a lawyer ("Where Is Josh's Friend?"). Scott was extremely supportive of Paula's decision but had concerns when her friend Rebecca was late in writing a recommendation letter for his wife. Scott later felt like he was being ignored and underappreciated by Paula and had an affair.

Retrieved from "https://cxg.fandom.com/wiki/Scott_Proctor?oldid=18272"
Community content is available under CC-BY-SA unless otherwise noted.