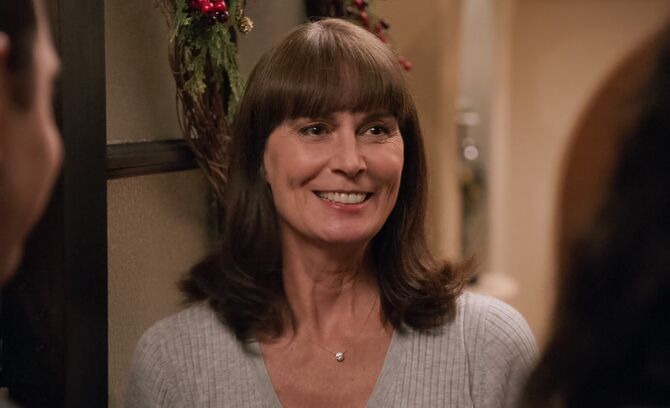 Shawna is the mother of Greg Serrano and ex-wife of Marco Serrano. She divorced Marco when her son was still young which caused a strain on her relationship with Greg. She now resides in Beverly Hills with her new husband Stewart and their twin children named Mason and Lilly. Her first appearance was in Season One episode "My Mom, Greg's Mom and Josh's Sweet Dance Moves!". She is portrayed by actress Mel Harris.

In 2015 on Christmas, Shawna invited her son Greg to her home for a holiday dinner with his step siblings and her husband Stuart. Shawna was sad he refused to call her mom but did her best to make Greg and a friend he brought with him, Heather Davis, welcomed in her home. Shawna attempted to put Greg at ease by having Mason and Lilly serve their brother cocktails they created. This had the opposite effect as it made Greg feel like she was judging him for being a lowly bartender. Shawna insisted that wasn't the case but told him if he wanted to go back to school she and Stuart could lend him money. This made Greg angry and he directed his ire at Mason and Lily claiming he wasn't a freeloader like they were.

Heather attempted to change the subject and complimented the fake Christmas tree. When Shawna pointed out it was a real tree, Greg took the opportunity to make a crack about his mom's breast implants. Shawna again took his snarkiness in stride and said her breasts were real, just real expensive. The joke helped to ease the tension and lighten the mood. Later, Shawna served Heather and Greg some egg nog then went back to the kitchen to get cookies out of the oven. Greg made a thinly veiled sarcastic remark about her leaving something behind. Shawna demanded to know what he meant by that but Greg tried to brush the comment off. Heather answered for him by saying her son never get over Shawna leaving him.

Shawna claimed she always wanted Greg to live with her but he insisted on staying in West Covina with his father. Greg argued he couldn't just leave his dad as easily as she did. Shawna replied she and his father were both unhappy at the time but acknowledged she should have insisted on shared custody. Ironically the reason she didn't was because she didn't want to force it on Greg and have him hate her. She told Greg that her home is his too and he is always welcomed. Shawna waited for a response from her son who was unsure of how to react. It wasn't until Heather and Mason pointed out he was in the wrong that Greg realized how horrible he was being to his mom. Shawna accepted Greg's apology and was pleased when he finally called her 'Mom' ("My Mom, Greg's Mom and Josh's Sweet Dance Moves!").

In 2016, Shawna received a phone call from Rebecca Bunch who claimed to be an ex-girlfriend of her son Greg. Shawna was confused when Rebecca asked about a botched plastic surgery she supposedly had. Rebecca also believed for some reason that Greg was with her looking after his step siblings while she was recovering. When Rebecca continued to go on about this Shawna decided to just hang up on her ("Where Is Josh's Friend?"). At the time Shawna did have a rhinoplasty done but it turned out great. Unbeknownst to her, Greg had lied about this to everyone he knew to cover up his recent DUI arrest and subsequent attempts to deal with his alcoholism ("When Will Josh See How Cool I Am?").