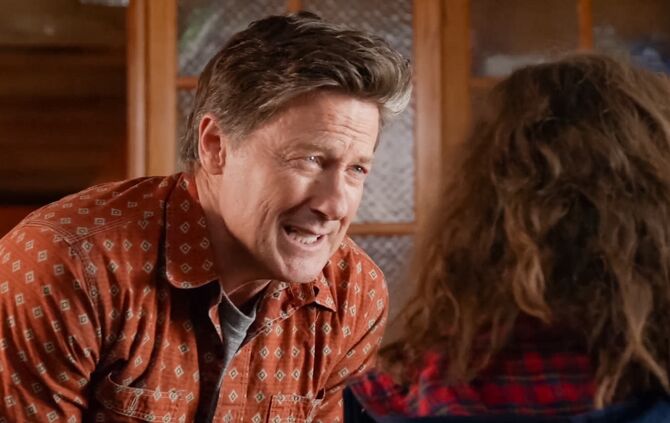 In 2016, Silas' daughter Rebecca quickly got engaged to her boyfriend Josh Chan and was making plans for the wedding which was to happen not too long afterwards. She sent Silas an invitation to her wedding but he told her he was stuck at a remote Alaskan construction site and couldn't make it. He was surprised when Rebecca's boss Nathaniel Plimpton III actually sent him a private plane to take him to West Covina so that he could make the wedding. He showed up at Rebecca's law firm Whitefeather & Associates to surprise her and she was overjoyed to see him. After she hugged him Rebecca thanked her boss for arranging this before embracing Silas again. While they hugged her other boss Darryl Whitefeather compared thier reunion to the movie "Marley and Me" ("Is Josh Free in Two Weeks?").

Silas was texted by Rebecca about getting together before the wedding but he told her he couldn't because he had work conference calls to take. He told her he'd make it to the rehearsal dinner and unbekownst to her invited her boss Nathaniel to attend as well. When he showed up to the event Rebecca hugged him for an uncomfortably long time creating a scene. He had an acrimonious reunion with Naomi who gleefully reminded him he was now twice divorced. Rebecca asked Silas if they could have a father/daughter dance at the wedding and he agreed. He also met Rebecca's fiancée Josh who asked if they could talk in private. Once they were alone Josh asked Silas if he knew about anyone in Rebecca's past named 'Robert'. He remembered that name was related to a situation which resulted in Rebecca leaving Harvard.

The next day, Silas met up with Rebecca at a choreographer's studio to rehearse thier father/daughter dance. Silas corrected the choreographer when he mistook them for a couple although Rebecca seemed flattered. The choreographer tried to get them in the mood by having them remember happy times together. They were unable to as Silas was never a significant prescence in Rebecca's life. The last time they saw each other was four years ago when he took his new family to New York City to see "The Lion King". Rebecca had somehow found out and the two had a brief talk over a cup of coffee. Silas apologized but Rebecca dismissed it as no big deal. He told her he had always hoped they'd eventually be able to reconnect as adults. Silas then asked her if he could borrow money as his son Tucker needed new braces.

She was upset by his request and refused so once rehearsal was over Silas went back to his hotel room. Not long afterwards Rebecca showed up with an apology and a check for the money Silas asked for. She pleaded with him to stay for the wedding and walk her down the aisle. Silas pocketed the check and told her he would stay but asked that they forget the past and start over. The day of the wedding, Silas was waiting for the ceremony to start. Along with the other guests he witnessed Rebecca running out of the hotel towards a cliff at the edge of the venue. Silas joined the crowd that had formed to watch as Rebecca's bridesmaids try to coax her away from the precipice. She seemed in a confused state and fainted only to be caught by her friend Paula.

They all overheard that Rebecca was despondent that Josh had left her like the other men in her life had. Her friend Paula convinced her it wasn't her fault but the men who continued to let her down. Silas was wary when Paula pointed out the first person to do this who was him. He suddenly found himself the center of attention as all eyes turned towards him. Rebecca looked at Silas with anger as she confronted him backed up by her friends. Silas was indignant and replied he wasn't going to stay just to be insulted. Rebecca told him he should take his check and go and that she never wanted to see him again. Silas asked Nathaniel if he could use his private plane again but was refused. Before leaving Silas told his daughter that she was crazy which Rebecca didn't deny ("Can Josh Take A Leap Of Faith?").