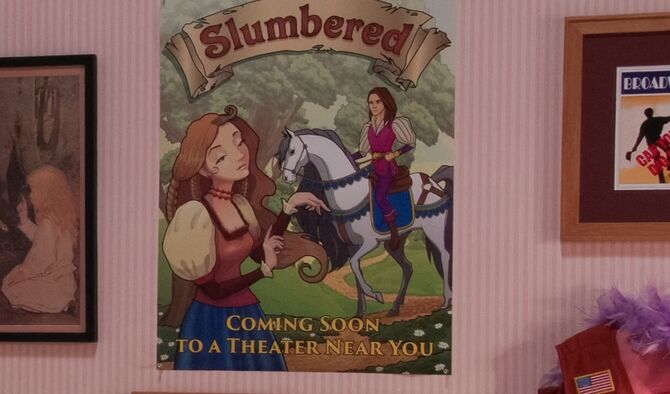 Slumbered was an animated film released in the 1990's which was based on the Brothers Grimm fairytale "Sleeping Beauty". As a child Rebecca Bunch was a huge fan of the fantasy which had a prince awakening a sleeping princess. When she got older she still believed strongly in the romantic clichés prevalent in such films. These unrealistic ideals heavily influenced her into adulthood and was a large part of her impulsive decision to move to West Covina, California to chase after her ex-boyfriend Josh Chan. However, she wasn't willing to let those tropes happen organically as she and her friend Paula Proctor spent her first year in town trying to manipulate them to occur. The first mention of the film was in the Season One episode "Paula Needs to Get Over Josh!".

In 1995, a prepubescent Rebecca Bunch forced her friend Jake to play out a storybook fantasy she envisioned. He was to be her prince on a mission to rescue her in the enchanted woods where the evil witch had taken her. When they finally laid eyes on each other the spell cast on her would be broken and a song would play. Rebecca imagined the song would be like the one from her favorite animated movie Slumbered. She began singing the song off key (♫ One Indescribable Instant ♫) but Jake cut her off. He had originally just wanted to play with his trucks and declared he wasn't going to do this. Rebecca was annoyed and told him that with that attitude he'll never be anyone's Prince Charming.

Over two decades later, Rebecca was in a friends-with-benefits arrangement with Greg Serrano after having given up on chasing after Josh Chan. She wanted to take the relationship to the next level and although he seemed to feel the same way Rebecca was still unsure. She went to Greg's ex-girlfriend and her next door neighbor Heather Davis for advice. Despite Heather's assurances that Greg was really into Rebecca she wanted tangible proof. Rebecca believed that she and Greg needed a specific romantic moment like one seen in "Slumbered" to officially begin their courtship. Heather suggested to Rebecca that she just be honest with Greg and not wait for nonsense like angelic choirs to sing their approval.

Rebecca tried to follow Heather's advice but had an idea when she saw Greg was invited to Jayma Chan's wedding. They would go together, soak in the romantic atmosphere and the moment would eventually happen. Greg agreed but felt Rebecca was not over Josh and decided to act aloof around her, believing she was attracted to that. When he picked Rebecca up he responded nonchalantly when she made a dramatic entrance down a staircase wearing a nice dress. She was disappointed at his reaction, as she had envisioned this as a scene from "Slumbered" where the heroine floated on a magic pillow. At the reception Greg's resolve to keep the façade going faltered when Rebecca pleaded with him to enjoy the event. However, Greg's fears resurfaced when he saw Rebecca and Josh exchange longing looks.

He began to drink heavily and ignored Rebecca, who was saddened that their moment wasn't likely to happen. She was surprised when Paula showed up to the event and reiterated Heather's advice to just be honest with him. She found Greg at the bar totally wasted but confessed her feelings anyway. Greg was about to answer when he saw Josh and his insecurities returned. He told Rebecca that they should just remain casual, and then passed out from his alcohol consumption. Rebecca than unexpectedly got the romantic moment she wanted when Josh texted her. As his Tita Myrna was on stage belting out the "Slumbered" song "One Indescribable Instant" they drove to a secluded area where Josh confessed his feelings for Rebecca ("Paula Needs to Get Over Josh!").

In 2018, Rebecca's eleven year old half-brother Tucker Bunch travelled to West Covina to visit his sister. Tucker had a love of musical theater just like Rebecca and wanted to star in a Los Angeles production of "Peter Pan." He discovered her diary from when she was a girl which detailed her obsession with the movie "Slumbered." He manipulated her into helping him get an audition by pretending to like the animated feature too. Tucker also gave the diary to Rebecca's ex-boyfriend Nathaniel in exchange for his bribing the casting agent. When Rebecca learned about this she had Tucker relinquish the role. She ultimately forgave his scheme and together they watched a copy of the movie "Slumbered" on VHS before he went back home ("I'm Making Up For Lost Time").