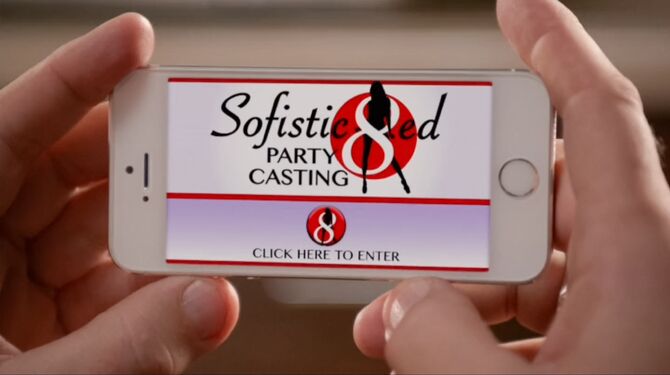 Sofistic8ted Party Casting is a service available through an app on mobile devices which provides women to attend parties, gatherings and other social functions.The agency has a video on it's website detailing its purpose as the women loaned out are there to enhance the festivities. The company has a three tier selection system in increments of 15, 25 and 35 women. The service has an app that can be downloaded and has a guarantee that the women will be there in thirty minutes ready to party. It's first appearance was in the Season One episode "I'm Back at Camp with Josh!".

In February of 2016, Darryl Whitefeather invited Greg Serrano, Hector and Josh Wilson to his apartment for a PPV party. However the boxing matches were boring and his guests were about to leave to go pick up girls at a new bar on East Cameron. Darryl convinced them to stay by saying he could get women to show up. After searching online on his phone Darryl found the Sofistic8ted Party Casting agency. He placed an order and not long afterwards they arrived quickly just as advertised. One of the many women who showed up was Wesr Covina native Ashley Pratt who was a former classmate of Greg, Hector and Josh. She recognized everyone except for Greg but found herself charmed by his humor.

They found a corner in Darryl's apartment and started talking which led to them making out. Meanwhile, Darryl was overwhelmed by all the guests and was backed up by White Josh when he admonished everyone for not using coasters. At the same time, Ashley told Greg she could see a future for them together. This caused Greg to be apprehensive and he realized his friends were right about his commitment issues. Afterwards, White Josh helped Darryl clean up once all the party enhancers and actual guests left. As they tidied up Darryl admitted to WhiJo that he hired all those women from Sofistic8ted Party Casting ("I'm Back at Camp with Josh!").