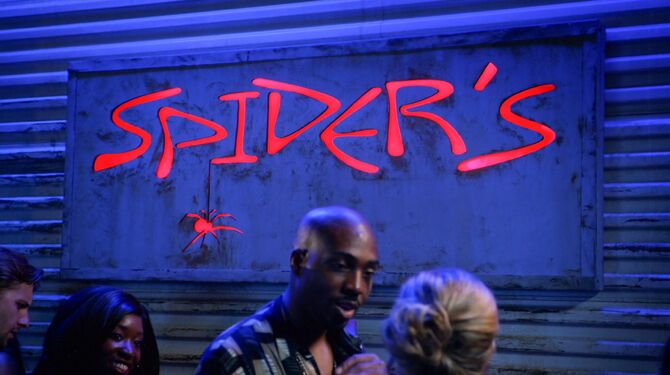 Spider's is a night club located in West Covina, California. Josh Chan and his girlfriend Valencia Perez were frequent visitors to the establishment. It's first appearance was in the season One episode "Josh's Girlfriend is Really Cool!".

Sometime after Rebecca moved to West Covina, California, she and Paula Proctor checked Josh Chan's status updates to see what he was up to. They discovered he was going to a night club called Spider's and Rebecca went off on a tangent she noticed about the name. She had seen flyers promoting the club which put the apostrophe in different places. Despite her confusion she and Paula made plans to go Spider's too in order to "accidentally" bump into Josh. When they arrived they were denied entrance by the bouncer who didn't care for Paula's pushy attitude. Rebecca tried to bribe him but when she gave him too much money he believed her to be a cop or a drug dealer and refused to let them inside.

Rebecca at first seemed to accept the bouncer's decision and turned away only to try and force her way past him. She made a spectacle of herself by ducking under the bouncer's legs exposing her stockings to the rest of the patrons. It wasn't until a few days later that Rebbecca finally entered the club alongside Josh, Greg Serrano and Valencia. She had managed to become good friends with Valencia after taking one of her yoga classes. Rebecca had at that point transferred her obsession with Josh to Valencia who was unaware of her true history with Josh. The two danced together during which Rebecca downed multiple shots. Losing her inhibitions due to the alcohol, Rebecca got swept up in the moment and kissed Valencia on the dance floor.

Valencia pushed her away and went back to thier table as Rebecca tried desperately to explain herself. Greg and Josh had joined the ladies at this point and we're trying to keep the situation from escalating. Rebecca didn't help matters when she revealed Josh and her were once a couple when they spent a summer as teenagers at camp. Furious she had been lied to, Valencia stormed out of the club with Josh in tow. Greg attempted to comfort Rebecca and offered to buy her dinner but she didn't want his sympathy and decided to go also. On her way out she heard a patron greet the club owner whose name was "Mr. Spiders". Rebecca was at least satisfied that her earlier question about the club's name was finally answered ("Josh's Girlfriend is Really Cool!").