Crazy Ex-Girlfriend Wiki
Register
Don't have an account?
Sign In
Advertisement
in: Characters, Season One Characters, Darryl Whitefeather,
and 4 more 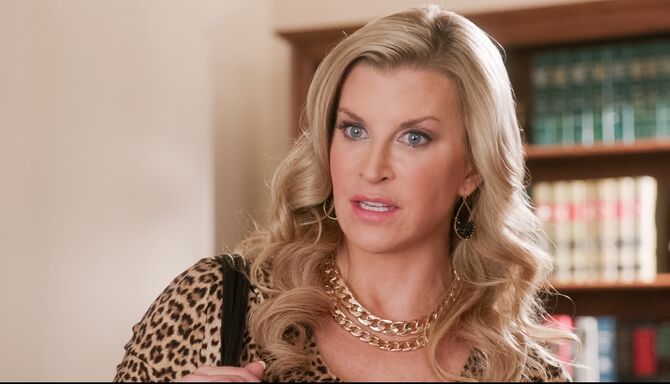 Stacy Whitefeather is a West Covina resident who had formerly been the wife of Darryl Whitefeather, a local attorney and founder of Whitefeather & Associates . Together they have a daughter Madison with whom they share joint custody. Stacy had long been unhappy with their marriage and had an affair with her boss for several years until she finally filed for divorce. Her first appearance was in the Season One episode "Josh and I Are Good People!". She is portrayed by actress Allison Dunbar.

In October of 2015, Stacy Whitefeather was in the midst of finalizing her divorce from her husband Darryl. A point of contention was custody of their daughter Madison which they still hadn't resolved. As Stacy was preparing for a business trip to the Cayman's, she and her attorney were summoned to a private hearing with the judge. One of Darryl's attorney's from his firm named Rebecca Bunch, who was now representing him, had called the meeting. She wanted to present important evidence which turned out to be Madison's YouTube channel. Stacy was surprised as she wasn't even aware her daughter was posting videos online.

The recording showed that on that once when Madison was at her mom's house she was left alone while Stacy was at a motel with her boss. This wasn't a one time occurrence as Madison also mentioned this happened the previous week as well. Rebecca pointed out more parental neglect adding that Madison stated she was going to use the gas stove to make s'mores. Stacy tried to explain that she was only gone for a few minutes and that Madison was mature for her age. Darryl wanted to know when she started sleeping with her boss of five years. Stacy's hesitance to answer Darryl realized she had been having an affair that entire time.

Stacy mocked Darryl by saying her boss didn't talk about his feelings all the time or cry at cat food commercials. Based on the evidence presented the judge decided that Darryl would be awarded temporary full custody. Stacy was told she would have supervised visitation until the custody arrangements were permanently decided. Stacy reluctantly accepted the decision and returned home to finish packing for her trip. She was loading her luggage into the car and left to grab a few more things only to return to find Rebecca putting something in her bags. Stacy demanded an explanation and Rebecca stated she was there for justice.

Stacy criticized Rebecca for her self-righteousness and questioned what was wrong with her. She was shocked when her ex-husnands attorney admitted her actions were a result of her own parents bitter divorce. Unwilling to see Madison turn out the same way, Stacy and Rebecca agreed to work together to figure out an amicable custody schedule. Stacy postponed her trip and went with Rebecca to Home Base where Madison was about to have a baseball game. Her daughter was happy with the news and that her mother was staying to watch her game. Privately Rebecca inquired about all the money she tried to plant in Stacy’s car. Stacy told her she already spent it on a hot tub ("Josh and I Are Good People!").

Later that year Stacy and Darryl finalized their divorce and officially resolved the custody dispute involving Madison. As part of her settle,ent Stacy received shares in Darryl’s law firm Whitefeather & Associates which made her part owner. Not long afterwards she was approached by an attorney named Nathaniel Plimpton III who expresses interest in acquiring her shares of Darryl’s firm. He represented his much larger firm Los Angeles of Plimpton, Plimpton and Plimpton. Nathaniel had already purchased half ownership of Whitefeather & Associates but was looking to have the controlling interest. Stacy agreed to the deal and nonchalantly sold her shares without thinking of the consequences ("When Do I Get to Spend Time With Josh?").