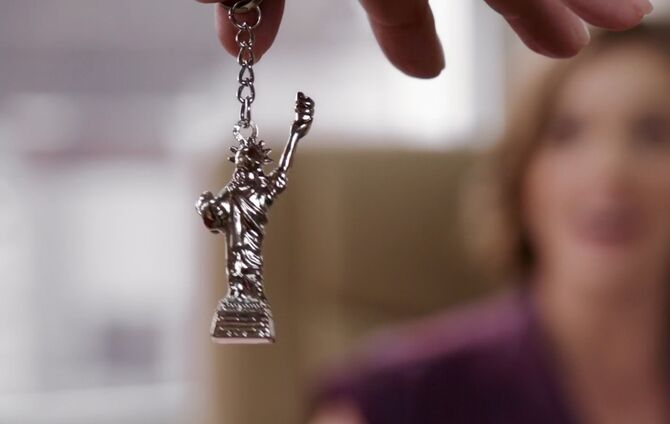 The Statue of Liberty keychain is a gift Paula Proctor gave to Rebecca Bunch not long after they met. It was a well meaning but not so subtle reference to Rebecca's former home. Surprisingly the trinket would end up meaning a lot to Rebecca who thought of it as a symbol of her friendship with Paula. She kept the token of affection close even when the two had a brief falling out. It was first seen in the Season One episode "Josh's Girlfriend is Really Cool!".

In her first year in West Covina Rebecca became best friends with Paula. They bonded over Rebecca's romantic pursuit of Josh Chan which Paula pledged to help her with. Paula was excited by this endeavor and bought Rebecca a Statue of Liberty keychain while she was at the car wash. She brought the item to work along with strawberry donuts Rebecca liked. When she presented her friend the keychain Rebecca was underwhelmed. She did appreciate the gesture though and Paula insisted she attach it to her keys immediately. Rebecca complied wanting to appease her friend but it made Paula realize she created an awkward situation. She confessed she always wanted a daughter to spoil but instead has two sons that are horrible ("Josh's Girlfriend is Really Cool!").

In her second year in West Covina, Rebecca had a falling out with Paula just as her friend was dealing with an abortion, going to law school and her husband Scott cheating on her. Rebecca volunteered to help out by taking take care of Paula's son Tommy. Things went bad when she took Tommy to a bar and lost him. Rebecca was shocked when she found Paula and Tommy at the Proctor residence. After Tommy covered for her Josh unexpectedly showed up declaring his love for Rebecca but she rejected him since Paula needed her. She confessed to Paula what really happened and gave back the Statue of Liberty keychain feeling she didn't deserve it. Paula assured her it was okay and that by not going with Josh she more than proved her friendship ("Who Is Josh's Soup Fairy?").