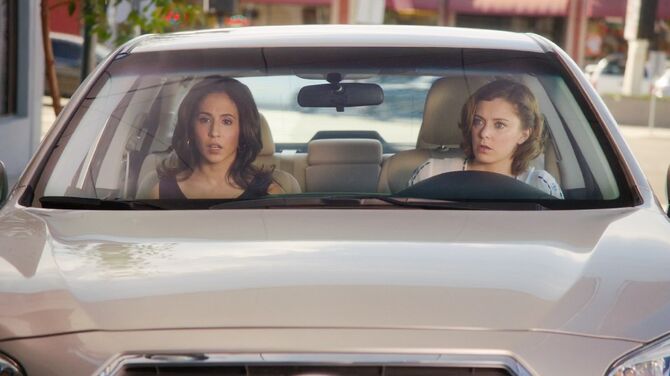 Subaru Legacy Rebecca's car in 2016
Owned by: Rebecca Bunch — First Appearance: "All Signs Point to Josh...Or is it Josh's Friend?"

In 2016, Rebecca Bunch learned through Snapchat alert on her phone that her ex-boyfriend Greg Serrano was at the Los Angeles International Airport. She was shocked to learn he was apparently about to leave his hometown of West Covina, California. Earlier Rebecca had been rejected by Josh only to later reconnect with Greg. It seemed as if they were going to start dating once more but he never showed up to a rendezvous location. Upon learning he was moving away Rebecca quickly got into her new Subaru Legacy and drove at a frantic pace to the airport. Once she arrived at LAX in her car, Rebecca sprinted from the parking garage to the terminal and managed to catch up to Greg ("All Signs Point to Josh...Or is it Josh's Friend?").

Sometime later, Rebecca ran into Valencia Perez and after a bonding experience became friends. They both learned from Instagram that their ex-boyfriend Josh had a new girlfriend named Anna Hicks. After researching her online (♫ Research Me Obsessively ♫) they drove in Rebecca's Subaru to Anna's town of Silver Lake. They went to Anna's beauty salon where Rebecca and Valencia got out of the car to get a closer look. They saw she had a pet cat named "Gravy" and overheard what they thought was Anna conducting a drug transaction. They retuned to the Subaru and agreed Josh needed to be told. However, when Rebecca started the car and started to leave the Subaru drove over Gravy the cat and severed his tail ("Who's the Cool Girl Josh Is Dating?").