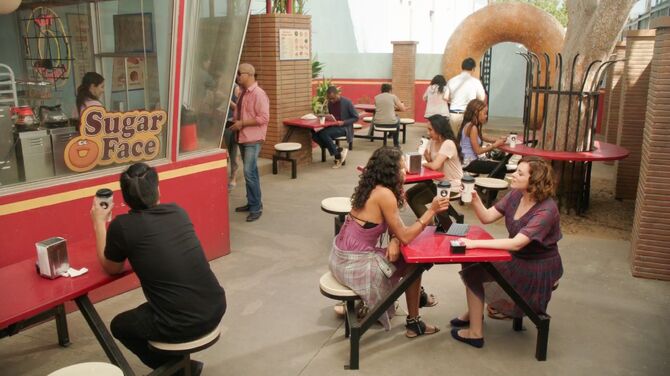 Sugar Face is a doughnut shop located in West Covina, California. It is an outdoor cafe which also serves coffee alongside its pastries. It is a frequent hang out of Rebecca Bunch and her friends. It's first appearance was in the Season Two episode "When Will Josh and His Friend Leave Me Alone?".

In 2016, Heather Davis won the "Miss Douche" contest and was awarded $10,000. She decided to use the money to move out of her parents apartment and find a place to live with Rebecca Bunch. She and Rebecca went to the Sugar Face doughnut spot to look at potential homes. As they scrolled through several real estate listings on Rebecca's laptop they were shocked to see Valencia Perez at the cafe's pick up counter. She was actually eating doughnuts and looked to be a few pounds heavier since they last saw her. Rebecca and Heather tried to leave but they were spotted by Valencia creating an awkward situation ("When Will Josh and His Friend Leave Me Alone?").

Later, Rebecca and Heather were again at the donut shop this time discussing Valencia. Rebecca was inspired by a feminist tome to reconnect with Valencia over thier shared romantic trauma with Josh. Her scheme didn't go exactly as she planned but Rebecca still managed to bond with Valencia. Afterwards Rebecca took Valencia to Sugar Face where they met up with Heather which eventually led to the formation of a Gurl Group. Paula unexpectedly showed up too with her new friend Sunil Odhav whom she introduced to Rebecca. As Paula and Rebecca sat separately with thier friends they snuck glances at each other as they worried that they were drifting apart ("Why Is Josh's Ex-Girlfriend Eating Carbs?").

After Josh got engaged to Rebecca and left her at the altar she went on a downward spiral culminating in her attempting suicide by overdosing on pills. Josh was guilty feeling responsible for her actions and met up with Hector at Sugar Face to talk to him about it. Hector was dating Heather and tangentially a part of the inner circle of Rebecca’s friends at the hospital helping her through the recovery process. He told Josh what happened wasn’t his fault and just a small part of the many underlying issues Rebecca had. Despite Hector’s assurances to the contrary Josh still irrationally believed he was entirely at fault ("Josh is Irrelevant.").