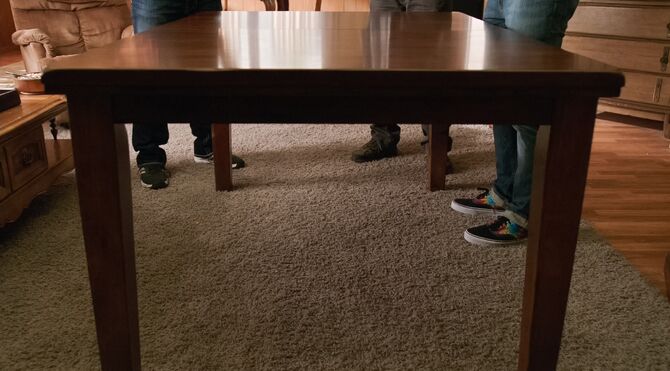 The Table was a gift Josh got for Valencia when they moved into an apartment together. He and his crew worked hard to assemble the table only to have their efforts go unappreciated. The table was first seen in the Season One episode "I'm So Happy that Josh is So Happy!".

As Josh and Valencia were moving their things into their new place, she lamented that they didn't have a dining room table yet. Josh decided to do something nice and bought one for Valencia as a housewarming present. He roped his friends into helping him and had Hector, White Josh join him at Greg Serrano's house. Hector balked when he saw the pages of instructions and the others had to convince him to stay. Hours passed as the crew struggled to make any progress which resulted in them all falling asleep during the process.

When they awoke, Josh was in a panic as Valencia had texted him about his whereabouts while they where sleeping. Both Greg and White Josh took the opportunity to try and subtly suggest to Chan that he break up with Valencia. They used the table as a metaphor for Valencia and expressed the dislike they had for her through the table. However, Josh was clueless to what they were trying to say and the conversation itself got derailed by Hector. He interjected a long monologue laced with double entendres supposedly about tandem parking.

When they finally finished putting the table together, Josh brought Valencia over to Greg's house to present it to her. She didn't care for it and stated that the style of table didn't match the decor she wanted for the apartment. Before she left Valencia weakly thanked everyone for their efforts. A disappointed Josh later met up with Rebecca Bunch at Cup of boba for a drink. He showed her a photo of the table he had taken on his phone and asked her if she thought it was a nice table. Rebecca replied it was a perfect table which Josh was grateful to hear ("I'm So Happy That Josh Is So Happy!").

Retrieved from "https://cxg.fandom.com/wiki/Table?oldid=8321"
Community content is available under CC-BY-SA unless otherwise noted.