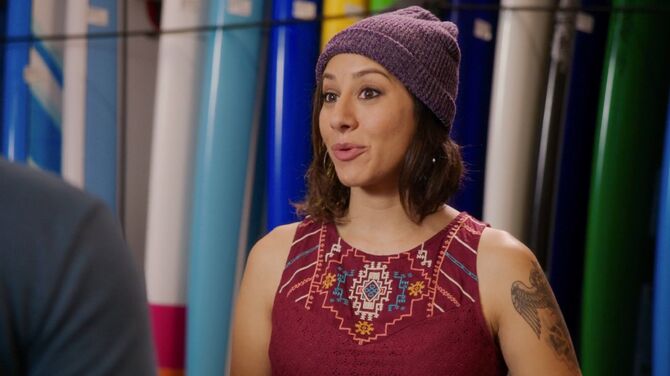 Tessa is a West Covina, California store clerk. She had two encounters with a strange customer at her store and at a local bar. A sentimental hopeless romantic at heart, Tess was moved when she found out Trent's true intentions. She would offer him advice on both friendship and romance. Her first appearance is in Season Two episode "Who Needs Josh When You Have a Girl Group?". She is portrayed by actress Eva Ceja.

In 2016, Tessa was at the surf shop ringing up a large sale for a customer named Trent Maddock. The total came to $10,312.93 and consisted of piles of beach wear apparel and accessories along with a surfboard and some skateboards. She was curious about his plans and asked if he was going on a surfing trip. He confessed that he can't stand the ocean and his purchases had more to do with blending in. Trent explained this was phase one of an elaborate plan he concocted. This part consisted of infiltrating a tight knit crew of SoCal bros. Tessa told him forcing friendships can't be done but Trent told her he didn't ask for advice.

Sometime afterwards, Tessa was at the Home Base bar watching the game when she ran into Trent who was sitting alone at a table. She asked him how his plan went and he admitted it didn't go well. He told her she was right about not forcing things lamenting how this failure cost him the heart of a woman he loved. When Tess heard this was all about him pursuing the object of affection she encouraged Trent to be more direct. She told him that even though friendships can't be forced love can and should be. Tess likened this to the fairy tale "Cinderlla" where the prince forced evryine to try on a shoe. Trent decided to take her advice and left the bar as Tessa cheered him on ("Who Needs Josh When You Have a Girl Group?").