That Text Was Not Meant for Josh! 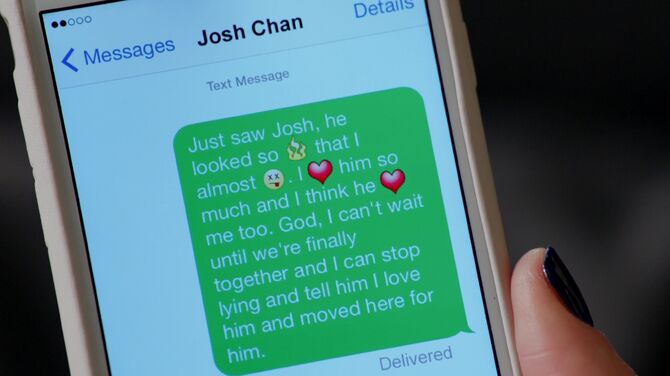 That Text Was Not Meant for Josh!

Paula and Scott Proctor are at Our Lady of West Covina inside the church office of Father Brah seeking guidance over their marital problems. Paula insists she wants to forget about claims she made to Scott that she was unhappy. Father Brah tells her negativity in any relationship needs to be resolved not suppressed. He suggests they have a romantic dinner date together so they can reconnect. Meanwhile, Rebecca is getting ready for work at her apartment when Greg unexpectedly drops by. He's there to pick up a computer hard drive she is lending to his girlfriend and her neighbor Heather. Things are awkward between them due to recent events. Rebecca heads to Cup of boba to grab a drink and review notes for a meeting she has at the law firm.

As she's going over the case Josh surprises her much to her delight. At the meeting in the conference room, Rebecca texts Paula while the opposing counsel presents her case. She then discovers she sent the message, which detailed her love for Josh, to Josh himself. When Paula finds this out she calls an end to the meeting and explains the situation to everyone. As they are all good friends of Paula they volunteer to help including Judge Harry Spencer (♫ Textmergency ♫). Remembering that Josh mentioned he left his phone at home Rebecca decides to go to his place and delete the message. Paula tells her she can't go because of her dinner date with her husband and Rebecca races off in her car alone with a police escort provided by the Judge.

She sneaks into Josh and Valencia's apartment complex and enters thier place with a spare key they hid. Rebecca deletes the cell phone message but is caught inside the apartment by Josh who arrives home. Rebecca quickly spins an elaborate lie about coming to his place since hers had just been broken into. While he gets changed to help her sort out the situation Rebecca calls Paula. She asks her to throw a rock through her patio door to authenticate her story. Paula is about to leave but is stopped by Scott. He demands an explanation for her recent strange behavior involving frequent phone calls and sneaking off at odd hours. She refuses to explain but in order to quell his suspicions invites him to go with her.

As Rebecca stalls in order to give them more time, the Proctors make it to her place. At Paula's urging Scott throws a rock through the patio door. Rebecca and Josh arrive to find the mess and she uses it as an opportunity to have some alone time with him. Thier conversation is interrupted by a cop who was answering a call Josh put into the police department. Rebecca comes up with another elaborate lie which both confuses and convinces the officer to leave without filing a report. At the same time the Proctors are celebrating a job well done and the two confess to each other affairs they nearly had. Paula also comes clean about helping Rebecca with her love life and tells Scott the whole story (♫ Crazy Ex-Girlfriend Theme Song ♫).

Back at Rebecca's apartment she and Josh are cleaning up the broken glass when he discovers the rock Scott threw (♫ Where is the Rock? ♫). It turns out it was a decorative stone from a set of three which was on Rebecca's coffee table. Josh slowly put the pieces together realizing that Rebecca had lied to him the entire time. He refuses to listen to another one of her convoluted explanations and can barely look at her. After he leaves the Fondu delivery man arrives with a dinner order Rebecca placed for them. Rebecca is devastated believing she ruined her chances with Josh (♫ You Stupid Bitch ♫). As she is lost in thought, Greg passes by her backyard having just left Heather's place. He notices the mess and rushes with concern to Rebecca who asks him to keep her company.

Greg is happy to until he notices the Fondu order has Josh's name on it. Realizing he is in the aftermath of another scheme of Rebecca's he angrilly departs. Meanwhile the Proctors unexpectedly bond over the drama in Rebecca's love life which rekindles a spark of romance in thier own relationship. The next day Paula finds Rebecca despondent at Cup of boba. She is unwilling to elaborate on what happened except to say she ruins everything. Paula rejects her assertion since she played a huge part in saving her marriage. She tells her that whatever seems insurmountable now is only a minor setback in the grand scheme of things. Paula also promises she'll always be there to help her through those rough times.

When the police officer arrives at Rebecca's House, she cites two sections of California Penal Code to the officer. She cites section 459, which she correctly cites as burglary, but she also cites 596, claiming it is vandalism. The actual section is "Malicious Mischief," and specifically deals with the poisoning of animals.