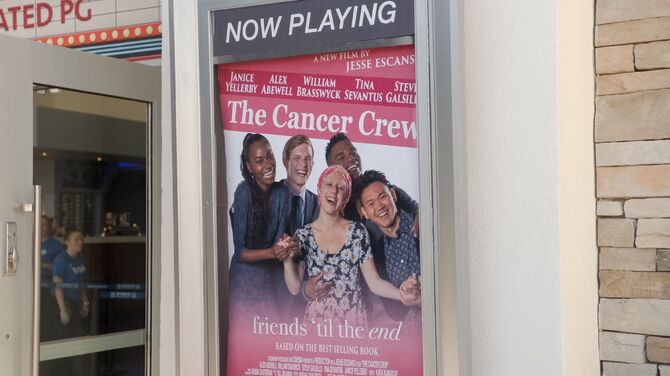 The Cancer Crew Recurring theme: Metafiction
First Appearance: ""I'm Going to the Beach with Josh and His Friends!""

The Cancer Crew was a 2016 fictional film about a close circle of friends dealing with one member having cancer. It was based on the best selling novel of the same name and directed by Jesse Escans. Rebecca Bunch and Josh's own personal crew saw this movie and enjoyed it. The first appearance of the film was in the Season One episode "I'm Going to the Beach with Josh and His Friends!".

In 2016, Rebecca went to the theater to watch the The Cancer Crew, a movie about friends dealing with one of their own being treated for cancer. Rebecca cried when the cancer survivor declared to her crew that they would all be friends forever. She downed an entire bucket of popcorn while watching the emotionally charged scene. Upon exiting the out door mall's movie theater, Rebecca noticed how alone she was as everyone outside was hanging out with their own specific crew (♫ I Have Friends ♫). Her thoughts were interrupted when she noticed Josh Chan and his friends sitting down on benches nearby.

They had seen the movie too and Josh believed they were all just like the friends in the film. Greg sarcastically agreed but noted that none of them have cancer...yet. Josh told everyone he related to the character of Chad, a sensitive jock who eats clean and journals hard. Hector saw himself as the "bad boy" rich kid who sleeps with the hot girl in remission. Valencia believed she was most like the caring nurse who donated her bone marrow which raised some eyebrows. This prompted Greg to ask if she felt a connection to the vain yoga instructor but all Valencia could say about her was that she was fat ("I'm Going to the Beach with Josh and His Friends!")

"'The Cancer Crew" is a parody of the genre of films where a close group of friends are forced to deal with a life changing event that affects all of them at once. Examples include classic films like "The Big Hustle", "Fried Green Tomatoes" and "Steel Magnolias".