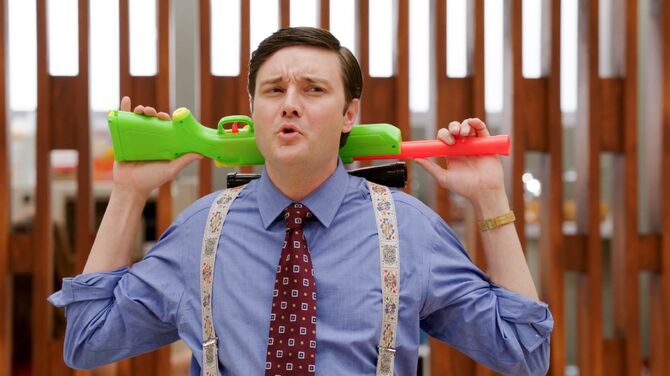 Tim Campbell is a lawyer at Whitefeather & Associates. He is work buddies with Jim and for a time they liked to amuse themselves by bullying Paula Proctor at work. This ended after Paula got some leverage on Tim regarding his true nationality and his illegal work status in the United States. His first appearance was the Season One episode "Josh and I Are Good People!". He is portrayed by actor Michael McMillian.

In November 2015 at Whitefeather & Associates, Tim was goofing around at the office and shot Paula with a toy gun. He apologized to her but called her by the name of Pamela which she corrected. Tim then took back the apology saying it was only meant for Pam which amused himself and Jim. He then asked Paula if she could reprint a copy of the briefs for the Caswick case for him but she refused saying he was rude. Tim's response was that at least he wasn't Pamela which again made he and Jim laugh. However, it stopped being funny when Paula was put in charge of the office. Rebecca Bunch was helping Darryl with his divorce proceedings and suggested Paula run the law firm while they worked the case.

Tim scoffed at the idea and insulted Paula by saying she was only good at filing and getting coffee. Despite his objection, Darryl officially put Paula in charge and cautioned Tim on his attitude before leaving with Rebecca. Paula then ripped the nerf gun out of Tim's hand and broke it in two. She told everyone to get back to work and stared menacingly at Tim who warily backed away. Tim's tray of alcoholic beverages was a victim of Paula's new office policies as she pushed it off of his filing cabinet and onto the floor. He nervously kept an eye on her from the break room worried she would find out his secret as she was going through old documents from Darryl's office.

As he feared she found out he was Canadian working in the states illegally on an expired Visa. He pleaded with Paula to keep quiet as he couldn't go back to his old job in Manitoba since he alienated all of his co-workers there. He had come to West Covina for a convention and met Darryl at a strip club. They partied all night and Tim got a job at the firm after giving Darryl falsified documents. Since then he admitted his struggles to keep his accent in check and pretending to not like hockey. Paula was unsympathetic to his plight and Tim asked her what she was going to do. She responded she didn't know and was gong to have to talk this over with Pamela who is a real bitch. Tim was relived when Paula agreed to keep his secret since she didn't want to break up his family.

In thanks Tim stood up for Paula when Jim made fun of her and also washed her car ("Josh and I Are Good People!"). Months later, Tim was complaining loudly about a case he was working on. It required Tim to handhold his client through the entire process and he wound up spending too much time with the guy. He revealed he literally saw more of him than his own wife and family for a week. This was also literally the case as Tim had shared a hotel room with his client in Fresno. Not only did they have to share a bed but he also saw his client nude several times. Unbeknownst to Tim, Paula, Rebecca and Ms.Hernandez overheard his rant. This inspired them all to come up with another plan for Rebecca to get closer to Josh Chan ("Josh and I Work on a Case!")