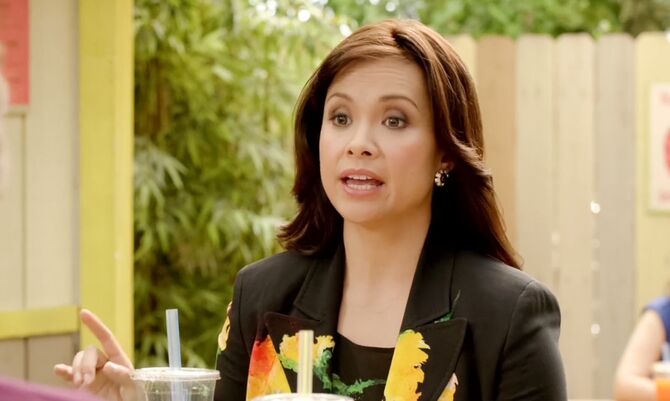 Tita Myrna is a member of the Chan family. She is the younger sister of Lourdes and the Aunt ('Tita' in the Filipino language of Tagalog ) to her older sibling's children. Myrna has the distinction of being the only relative to have been fond of Josh's ex-girlfriend Valencia Perez. It's hinted that she has been in the entertainment business for awhile and had even been on Star Search back in 1984. On that reality show competition she earned herself three and three-quarters stars for her performance of "One Indescribable Instant". As a wedding gift to her niece Jayma she performed that song at the reception. Her first appearance was the Season One episode "Paula Needs to Get Over Josh!". She is portrayed by singer/actress Lea Salonga.

In April 2016, Tita Myrna traveled to West Covina, California after being invited to her niece Jayma Chan's wedding to her longtime boyfriend Phillip Epstein. The day before the ceremony she met up with Lourdes Chan to discuss her wedding gift. It was to be her performing a song and she demanded a fifteen second intro before she went on stage. Myrna didn't think her request wasn't that out of line since she believed her voice was a gift from God and by extension her performance was to be one as well. Lourdes simply responded that her daughter was registered and needed dish towels instead. The conversation was interrupted when Tita saw what she believed to be a fan from her "Star Search" days staring at her.

Lourdes recognized the stranger as a family friend named Rebecca Bunch who greeted both ladies. Rebecca was already familiar with Tita as she hearing about her from the other Chans. Myrna was surprised when Rebecca presented to them a wedding gift she bought for Jayma which was a $2,500 dollar sculpture. Impressed with Rebecca's expensive tastes Myrna quickly warmed up to her. Rebecca apologized for an earlier incident which got her wedding invitation rescinded. Lourdes brushed it off believing Valencia was probably at fault which Myrna took offense at that and defended Josh's girlfriend. When Rebecca asked if they could give Jayma the gift for her Lourdes told her she could do it in person and re-invited her to the wedding.

Before the wedding ceremony, Myrna was contacted by Valencia and agreed to help her get Josh to propose. She brought Josh's grandmother's ring to the event and presented the ring to Josh at the wedding reception. She advised him to give it to Valencia whenever he was ready and Josh was at first appreciative of the gesture. It wasn't until he saw Myrna exchange a glance with Valencia that he realized he was being manipulated. Myrna admitted her collusion with Valencia which resulted in the opposite outcome she had intended. Afterwards, Mryna went on stage to give her wedding gift to Jayma and performed a rousing performance of the love song "One Indescribable Instant" ("Paula Needs to Get Over Josh!").

Retrieved from "https://cxg.fandom.com/wiki/Tita_Myrna?oldid=18809"
Community content is available under CC-BY-SA unless otherwise noted.