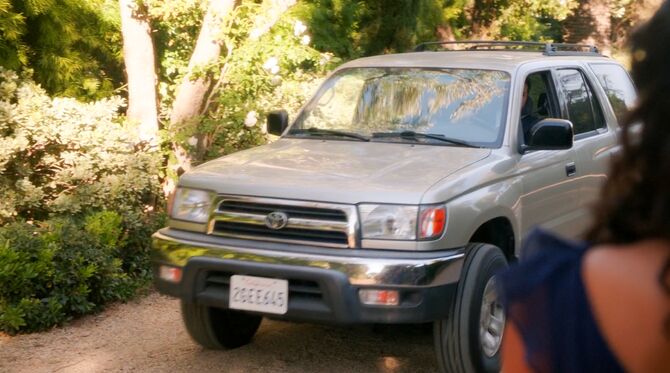 Toyota 4Runner Josh's vehicle
Owned by: Josh Chan — First Appearance: "I'm Going to the Beach with Josh and His Friends!"

The Toyota 4Runner is the vehicle Josh Chan drives in his hometown of West Covina, California. It is an older generation of the SUV which Josh has owned for some time. Josh was insistent that his vehicle be used as the transportation whenever he and his friends went on road trips. It was first seen in the Season One episode "I'm Going to the Beach with Josh and His Friends!".

In January of 2016, after watching a movie together Josh proposed that he and his crew go on their annual beach trip . They all agreed and much to everyone's surprise Valencia also invited Rebecca Bunch. Josh and his friends met up the next day at his and Valencias apartment complex . They finished loading up their gear and supplies into Josh's old Toyota 4Runner when Rebeccca arrived. She showed up in a huge Party bus she had rented just for the road trip. Josh was impressed and his friend's transferred their things from the 4Runner to the bus ("I'm Going to the Beach with Josh and His Friends!").

Later, Josh was convinced by Rebecca to take part in a class action lawsuit against the company called Greater City Water. Once the case was prepared and a court date set Josh drove his 4Runner from West Covina to Los Angeles where the hearing was to be held. At the courthouse Rebecca put on a strong case and gave a passionate speech about her new hometown. Although the case was ultimately thrown out, Josh was moved by Rebecca's words and kissed her afterwards ("Josh and I Go to Los Angeles!"). He went home in his 4Runner confused by his actions and drove straight to Father Brah to ask for his advice ("Josh is Going to Hawaii!")

In 2016, Josh was dumped by Valencia, had a fling with Rebecca and briefly dated Anna Hicks who broke up with him. Josh decided he didn't give Rebecca enough of a chance and rushed off to beg her to take him back (♫ Duh! ♫). In his hurry he forgot the keys to his 4Runner and ran back to Spider's to get them ("Who Is Josh's Soup Fairy?"). Not long after Josh proposed to Rebecca and a wedding was quickly planned. However, after learning Rebecca was hiding something in her past he started to have doubts about marrying her. On the day of the wedding he drove to the venue as Heather watched him aproach. Upon reaching the entrance Josh didn't stop and instead slowly drove his 4Runner until he reached a park where he took time to think things over ("Can Josh Take A Leap Of Faith?").

Two weeks after leaving Rebecca at the altar, Josh drives back home in his 4Runner to West Covina from the seminary. He had just backed out of an ill-conceived plan to escape drama in his life by joining the priesthood. He announced his return on social media adding that he be showing up first at Home Base to go into details about his decision. He was poorly greeted by his friends Hector and Josh Wilson along with Kevin the manager. They showed him an article Rebecca had gotten published with false accusations about his horrible behavior. Josh went to his 4Runner to find the file that Trent Maddock had given him weeks ago. He then drove to Our Lady of West Covina to seek counsel from Father Brah on what to do with the information he had ("Josh Is a Liar").

While he DJ'd at night, Josh found another job in the day time working for a delivery service called "Bro With A Truck." He used his 4Runner to pick up and deliver various items around West Covina. The service utilized a mobile device app which customers could select their "Bro" from the anonymous profiles listed on the official app. On one job Josh was picked by his acquaintance Paula Proctor. He drove his SUV to her house without telling her ahead of time who he was to surprise her. She was reluctant to use him until he reminded her that there was a two hundred dollar cancellation fee. Josh was to drive them in his 4Runner to San Bernardino where they were picking up an antique desk Paula purchased online to study for her law school finals.

To pass the time Josh told Paula about his life after Rebecca and the self actualizations he had made in therapy. After several hours they arrived at their destination which was the house of Mrs. Beattie. Josh was eager to grab the desk and go but Paula decided to strike up a lengthy conversation with Mrs. Beattie about her porcelain animal collection. After loading up the desk in his 4Runner, Josh confronted Paula about her procrastinating and suggested she was trying to avoid going home as she was fearful about finally fulfilling her dreams. Paula admitted he was right and the two returned to West Covina. Paula thanked Josh and suggested he finally move out of Hector's mothers house ("I See You").