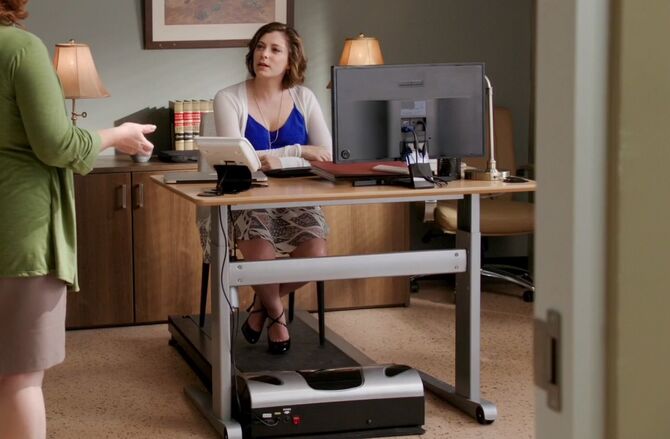 The Treadmill desk is an office desk that replaces the chair with a treadmill. It was an impulsive (and expensive) purchase Rebecca Bunch made based on something she had read. The Treadmill desk was first seen in the Season One episode "I'm Going on a Date with Josh's Friend!".

One day Rebecca read somewhere that sitting down was a new health hazard akin to smoking. She also remembered another report claiming that people are meant to walk at least ten miles a day to stay healthy. With this is in mind she purchased a Treadmill desk so she could excercise while at work. However, after having it put inside her office she found it to be more of a hindrance then expected. She couldn't get any actual work done while she was upright and moving. It also didn't help that matters that she hated walking in general. She stopped using the machine and placed a chair on the treadmill so she could remain seated at the desk.

Paula later entered Rebecca's office to discuss a case and was amused when she saw the desk. Rebecca explained the reasons behind why she bought the treadmill but all Paula could see was the money she wasted on it. Paula pleaded with her to avoid another big mistake by not going out with Greg who had just asked Rebecca out. Josh Chan then arrived for a scheduled appointment to talk to Rebecca about helping him with an application to the Aloha Tech Center. When he saw the treadmill he loved it and immediately started using it. He asked Rebecca how many miles she logged on the treadmill but she was vague about the answer ("I'm Going on a Date with Josh's Friend!").

The following year Whitefeather & Associates was sold to the Los Angeles law firm of Plimpton, Plimpton & Plimpton. Nathaniel Plimpton was sent to oversee the firm and made immediate changes. This included moving into Darryl's office who was took over Rebecca's office. Upon finding the treadmill desk in storage he swapped out his desk for it. Darryl went to his office and was surprised to find him using the treadmill. Nathaniel told him it took awhile for the maintenance staff to clean off the hotdog smell. Darryl accounted for the aroma by explaining Rebecca used to heat hot dogs on the treadmill motor to "jog and dog."

Nathaniel continued to use the treadmill desk as he anticipated his father giving him a big account. He was later told the account was going to be handled by the main branch as his father did not think his son was ready for such an important client. In response Nathaniel went on to binge all the unhealthy snacks he confiscated from the break room. He then went on the treadmill and tried to work off all the calories he just consumed. When Darryl interrupted his work out Nathaniel stumbled and fell face first onto the treadmill breaking a tooth and bloodying his nose in the process ("Will Scarsdale Like Josh's Shayna Punim?").