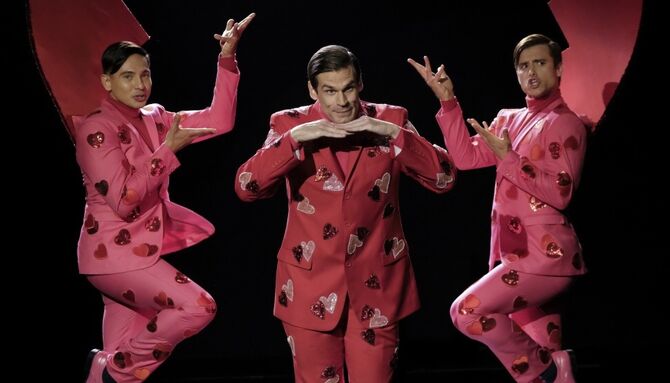 Rebecca decides that she loves that she is single now. (♫ Buttload Of Cats ♫)

Trent arrives (♫ I'm Just A Boy In Love ♫) and tells her his backstory about what happened after her failed wedding. He watched the wedding from the drone and followed her to West Covina Inn, but was hit by a bus and he had to spend months in a hospital under the care of Dr. Nick Roth and his jokes. He decided that he had enough, lived with cayotes and decided to return to West Covina. Trent blackmails Rebecca to force her to be his girlfriend by revealing that he has documents which confirm that she ordered a hit on Nathaniel's girlfriend Mona. Rebecca agrees to play the role in front of her friends and colleagues. (♫ Period Sex ♫) She lies to Paula that he has proof of Paula's illegal things to force her to help her gather the evidence against him. (♫ Back In Action ♫)

Rebecca and Paula find Trent's secret storage unit full of her photos, underwear and map, which prove that he has been stalking her even since they met. Trent discovers that she failed his love test when he discovers that they've found his storage unit. She says that she's not interested, but he believes that she has been encouraging him and giving him "Love Kernels" the whole time. He decides to give her the file that he has and leaves saying that she will never love him back.

Meanwhile, Valencia and Beth organize a teen birthday party in the style of 1920s with Josh as the DJ. He wants to do "The Royal", a dance he and Valencia danced at their high school prom, but Valencia is against it. The guests were bored with the music and Valencia decided to do the dance with Josh once more. ("All Hail the Queen").

Elsewhere, Mona revealed that she knows about Nathaniel's affair with Rebecca, and he asks her to move in with him.