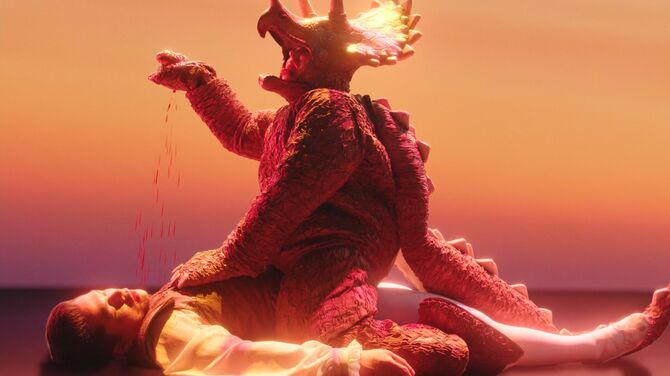 Triceratops (officially known as "Meketyltrichlorocaine"; also known as "3Tops" and "Mixy, Toxy, Cloxy") is a fictional hallucinogenic drug, named after the dinosaur and its three horns. The drug was sold at the annual San Gabriel Valley festival Electric Mesa and accidentally ingested by Rebecca Bunch and Valencia Perez. Its first appearance was in the Season Two episode "Why Is Josh's Ex-Girlfriend Eating Carbs?".

In 2016, Valencia Perez dumped her boyfriend of 15 years Josh Chan who rebounded with his ex-girlfriend Rebecca Bunch. Josh ended things with Rebecca soon after and she also got rejected by Greg Serrano. Rebecca had a cathartic burning of her ex's things, entered an internet contest and read feminist literature to cope. When Rebecca saw Valencia was also on a downward spiral she hoped they could commiserate over their shared romantic troubles. She kidnapped Valencia and took her to the Electric Mesa festival to bond. While there, they drank what they thought were ordinary drinks, discovering immediately after that the drinks were laced with the drug "Triceratops". They both experienced vivid hallucinations involving Josh. Valencia hallucinated that she performed a ballet with Josh who wore a Triceratops mask.

In Valencia's imaginary scenario she stabbed Josh with a dagger and held him as he passed away from his wound. Concurrently, Rebecca had a vision of herself dressed in a Triceratops costume chasing after Josh. When Rebecca caught him she ripped his heart out and started to eat it (♫ Triceratops Ballet ♫). Both Rebecca and Valencia come down from their high at the same time with different reactions. Valencia was saddened and confessed that she knew she and Josh were finished before she dumped him. Rebecca took away from her reverie the realization of how much Josh took advantage of her. She was furious at having been used and fueled by her drug-induced dream she convinced Valencia they should get revenge on their mutual ex-boyfriend ("Why Is Josh's Ex-Girlfriend Eating Carbs?").