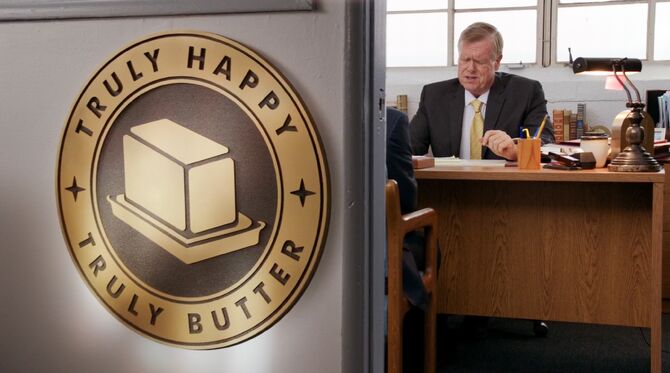 Truly Butter Butter making company
Location: Alluded to be in or near West Covina — Debut: "I'm Going on a Date with Josh's Friend!"

In 2015, an employee of the Truly Butter company called Gary masterminded a successful marketing campaign. The advertising posed questions about happiness which surprisingly resonated wth customers. Billboards, magazine ads and television commercials featuring the butter product and its existential theme became prominent fixtures around the country ("Josh Just Happens to Live Here!"). The campaign's popularity with the public translated to record breaking sales. Although the corporate higher ups were very pleased with the results one executive was troubled. He called Gary into his office to address his concerns who seemed noticeably unreceptive and seemed very distracted.

He praised Gary for his good work and congratulated him on how well things were going. The executive then broached the subject of the ad copy which he felt had darker undertones which contrasted the positive messages being conveyed. The executive was concerned and asked Gary point blank if he was alright. This caused his employee to have a sudden emotional break down. Gary inadvertently admitted his advertising copy was heavily influenced by trouble he was having in his personal life. He had made some extremely poor decisions and was now full of regret. With tears in his eyes Gary confessed to his boss that he left his wife for a prostitute ("I'm Going on a Date with Josh's Friend!").

The following year, West Covina attorney Rebecca Bunch was tasked with taking care of her best friend Paula Proctor's son Tommy for the weekend. At one point Rebecca imagined she was being interviewed for a podcast on good parenting. The podcast was sponsored by the Truly Butter company whose advertising copy was weirdly specific to Rebecca's situation ("Who Is Josh's Soup Fairy?").