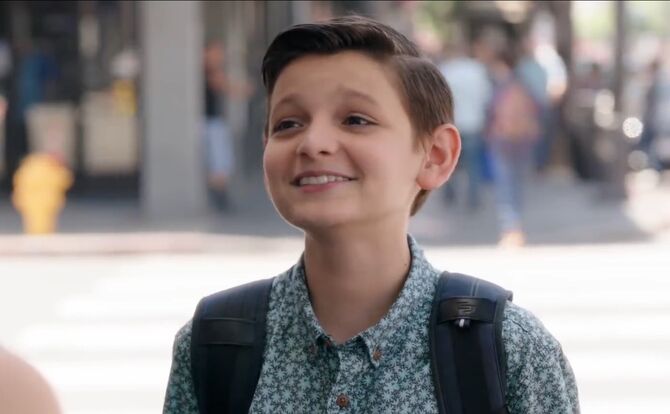 Tucker Bunch is the son of Silas and Marisa Bunch; he is also the half-brother of Silas' other child Rebecca Bunch. Despite his young age he is a talented singer and has aspirations to be the next big child star. Tucker shares a lot of similar traits with his half-sister including a love of musical theater and being overly dramatic. It's also suggested he suffers from similar mental issues just like Rebecca. He was first mentioned in the Season One episide "Josh Just Happens to Live Here!" and debuted in the Season Four episode "I'm Making Up For Lost Time." He is portrayed by actor Luca Padovan.

In 2015, Tucker turned seven years old and his mother and father threw him a birthday party ("Josh Just Happens to Live Here!"). His half-sister Rebecca attended the festivities and made things incredibly awkward. Tucker was told by Rebecca that he was "the spawn of his father's whore." Previously Tucker had seen Rebecca in New York City when he was there to see "The Lion King" on Broadway. At that point he was having a tough time and his parents were trying to cheer him up. They just happened to bump into Rebecca who hadn't been invited and she had a brief chat with their father at a coffee shop. Tucker last saw Rebecca at their Grandpa Bobo's funeral ("I'm Making Up For Lost Time").

Tucker's parents eventually divorced and he stayed with his mother who got sole custody of him. Together they remained in Santa Fe occupying the house his father originally owned. On a trip to the dentist it was revealed Tucker needed expensive braces to fix his teeth. His father was able to afford the devices by borrowing money from Tucker's half-sister Rebecca when he went to attend her wedding ceremony ("Can Josh Take A Leap Of Faith?"). During the summer time, Tucker was allowed to visit his dad. However, instead of having a fun vacation Silas had him helping out on his various construction projects. Tucker resented this especially since he got the beginnings of callous on his hands as he was unused to such physical activities.

Tucker discovered his sister Rebecca's diary from when she was a child hidden behind the toilet. She had left it at the house when she visited her father years ago. Sometime later he got a card from Rebecca on his birthday along with a pair of Fett Regoso brand sneakers. No long after he got into a loud argument with his mother yelling that she didn't understand him. In his room he re-read Rebecca's card and admired the shoes she sent. He hatched a scheme to use her to get him an audition for a "Peter Pan" musical in Los Angeles. Without his mom's knowledge he flew to West Covina, California. He managed to make it by himself to Rebecca's new place of work, a pretzel shop called "Rebetzel's Pretzels."

His sister was surprised to see him and decided to blow off work to spend time with him. She took him to her home where he met her roommate Heather Davis, who was suspicious of him. Heather insisted that Rebecca call Tucker’s mom to let her know he arrived safely. Tucker gave Rebecca the phone number, but told her she could only text his mom before excusing himself to use the bathroom. Once he was out of sight he answered Rebecca’s texts using a cell phone he had acquired. Later, Rebecca invited her friend Paula, who brought along her teenaged sons Brendan and Tommy. After declining a trip to the mall with them, he suggested to Rebecca they go see the sights in Los Angeles.

Tucker is a very manipulative and mentally ill kid.