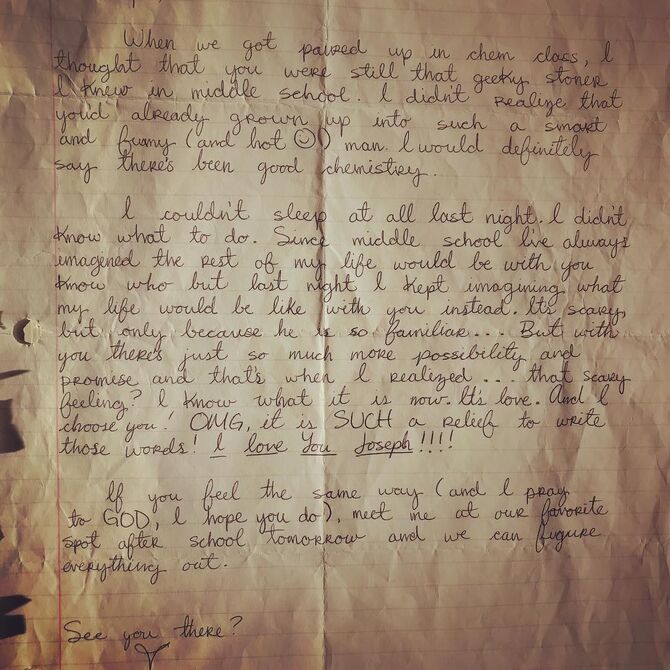 Valencia's love letter is a a hand written message she wrote in high school which went unread by its intended recipient for over a decade. In this note she declared she loved this person and not Josh Chan whom she was officially dating at the time.The letter was first seen in the Season Four episode "I'm Not The Person I Used To Be."

In 2006, Valencia Perez was still dating her high school sweetheart Josh Chan when they attended Pizarro Hills High School. It was her senior year and she was assigned as her chemistry lab partner Joseph, a stoner who was friends with Josh and his crew. An attraction grew between them and they started having a secret fling. This evolved into more serious feelings and Joseph gave Valencia an ultimatum to choose between him or Josh. She wrote him an answer but unfortunately it would take a long time for Valencia's love letter to reach Joseph. This was because Valencia had put the missive in the pocket of Joseph's varsity jacket which he ended up losing at school.

Valencia had chosen Joseph and asked him to meet her so they could plan their future together. However, since Joseph never read it and stood her up they both assumed their feelings weren’t reciprocated. The jacket ended up in the school's lost & found collection box which was given to the class president Hector. After graduation, Valencia remained with Josh while Joseph attended the seminary. During this time he and Valencia avoided each other while Hector stored the collection box in his closet. Twelve years later Hector retrieved it for the 2019 Pizarro high class reunion at Home Base. He brought it to the event hoping the items nostalgia would win him some favor with his former classmates.

In attendance was Valencia and Jospeh who watched along with their former classmates as Hector failed to impress his former constituents with the contents of the box. When he pulled out the varsity jacket Joseph was shocked to see it as was Valencia who realized he never got the letter. Before Valencia and Heather could retrieve the note Brah had already found it. Valencia watched as Joseph finished reading it and then started scanning the room until his eyes found hers. They both walked towards each other and Valencia asked that they go somewhere to talk. Joseph took her hand and led her to the bars backroom and Heather followed wanting to see what happened next.

Valencia reaffirmed it was Joseph that she chose years ago which he was happy to learn despite all the time that passed. She then asked what they should do now since they were both currently in committed relationships; he was devoted to his faith while she was with Beth. Although Joseph was glad to know the truth he told her that they missed their shot. The upside to this was that they both learned they felt the same way all those years ago which meant they got their moment back. Valencia agreed and they both embraced each other finally having closure on their time together. Heather watched on approvingly content on how the drama unfolded ("I'm Not The Person I Used To Be").

An actual letter was written by script coordinator Greg Hundemer and used as a prop on the show. Crazy Ex-Girlfriend writer and portrayer of Father Brah posted a reaction video of Rachel Bloom reading the letter on his Instagram account. That and a close shot of the letter can be seen HERE.