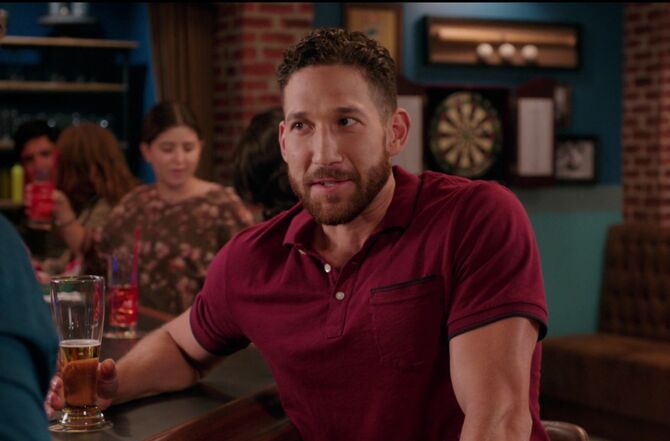 Vic is a West Covina, California resident who works as a personal trainer at the 24 Hour Gym. He is well liked by his clients and considered by local attorney Darryl Whitefeather to be one of the best trainers there. He is currently dating his co-worker and Darryl's ex-boyfriend Josh Wilson. His first appearance was in the Season Four episode "I'm So Happy For You." He is portrayed by actor Fernando Rivera.

In 2018, Vic was working for the 24 Hour Gym as a personal trainer alongside Josh Wilson. Through his co-worker he also got to know Darryl Whitefeather who visited the gym and who he helped on several work outs. Darryl once dated Wilson but the relationship eventually ran its course. Sometime afterwards, despite Wilsons tendency to go for older men, a mutual attraction grew between Vic and Josh. It got to the point that they would frequently text with each other. Vic would send him amusing photos like when he wore a tacky Hawaiian shirt at work. They finally went on a date at the Home Base sports themed restaurant. They played a game of darts and even though Vic was terrible at it they had a good time.

While drinking beers at the bar Vic met one of Josh's friends, Heather Davis, who reminded Wilson about her and Valencia's going away party. She also warned him another mutual friend Rebecca was having a hard time with them leaving. Before Heather left she invited Vic to the party which prompted him to ask Josh who all these people were. Josh was worried he might find the explanation boring but Vic insisted it was okay. They were a part of his life and Vic wanted to know more about Josh. Once he went over the drama surrounding his acquaintances Josh left the date in a hurry. Later Josh would explain the reason behind his hasty departure which he only understood after a conversation with Darryl.

His ex-boyfriend pointed out they were spending too much time together and it was holding Josh back from moving on to something new. Once Josh realized he wasn't giving Vic a chance he made things right by going to the party with him. When they arrived Vic admitted he probably wouldn't remember all of the back story Josh had given to him about his friends. While Josh went to get them drinks Vic went over to talk to Darryl who was also in attendance. He thanked Darryl for giving Josh the push he needed to start dating again comparing the situation to a science fiction series he watched. Darryl got the reference as he was a fan of the show too and was eager to discuss it with Vic ("I'm So Happy For You").

Later he briefly appears at the gym when White Josh complains to him about accidentally meeting Greg with Nathaniel ("I Need Some Balance").