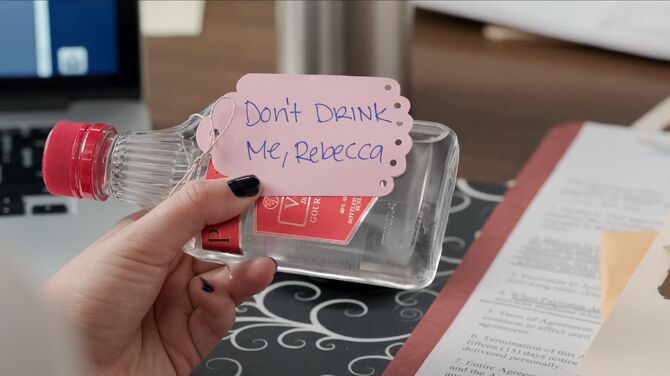 The Vodka bottle was Rebecca Bunch's special flask which she kept in her desk for emergencies. The Russian beverage made of ethanol and distilled water was her go to alcohol of choice whenever she needed a pick-me-up. She tied a warning note around it to prevent herself from drinking it but it proved an ineffective deterrent. The bottle was first seen in the Season One episode "I'm So Happy That Josh Is So Happy!".

Sometime after Thanksgiving, Rebecca sunk into a deep depression over Josh Chan's announcement that he and Valencia were moving in together. Her melancolly affected her job as she was unable to prepare for a meeting with a potential client for the firm, a rich businessman named Calvin Young. She screwed up a draft for a speech she was to give welcoming client and decided to self medicate to calm her nerves. Rebecca turned to a Vodka bottle she had hidden away in her desk for emergencies. She poured the alcohol into a tin mug she had full of pens which she emptied. Rebecca didn't notice that a pen in the mug had leaked ink into it before she drank from it. She was unaware her teeth turned a blue color because of this..

At the meeting, Rebecca was still distracted only to be was shaken out of her thoughts by Darryl who had just introduced her. She started her speech only to have Karen point out her teeth were blue and asked her if she had been drinking out of the toilet. Rebecca tried to wash out her teeth with a glass of water and flubbed her speech by mentioning Josh's name. Darryl took her out of the meeting and confronted Rebecca about what had just happened. He asked if she had been drinking since Karen said she smelled Vodka on her. She didn't deny it but instead said that was ridiculous because Vodka doesn't smell. Darryl told her she should go home for the rest of the day before she could make up any more excuses about the Vodka ("I'm So Happy That Josh Is So Happy!").

Retrieved from "https://cxg.fandom.com/wiki/Vodka_bottle?oldid=13327"
Community content is available under CC-BY-SA unless otherwise noted.