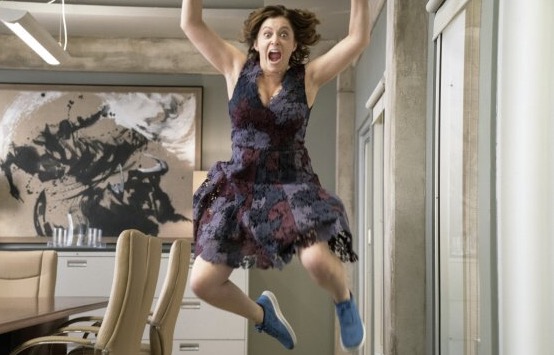 When Do I Get to Spend Time With Josh?

At the Proctor residence, Paula is grateful for Rebecca's help around the house but tells her she can't keep avoiding Josh. Paula invites Josh inside and he begs Rebecca to take him back. Paula encourages Rebecca to be with him and threatens Josh to not break her friends heart again. Rebecca and Josh spend the next four days reconnecting with one another. At Rebecca's home she and Josh plan on going to the Raging Waters park only to be told by Heather that Darryl's been trying to contact Rebecca. She goes to the law firm and asks Josh to wait for her as she pops into what appears to be a meeting in the conference room. Once inside Rebecca learns Darryl sold half of the law firm and is introduced to her new boss Nathaniel Plimpton III.

She intends to avoid the ramifications of this news so she can keep her date with Josh but before she can go Rebecca is asked by Nathaniel to see him in his office which was formerly Darryl's. He tells Rebecca from now on her job is to be the main priority and insults Josh whom he mistakes for a water cooler man. Rebecca quits in response but finds that Nathaniel is unfazed by this. He explains since she's no longer on payroll he can fire less staff to make up for the $250,000 debt he's in for buying the firm. Rebecca declares she can bring in the revenue needed to prevent this and takes back her resignation. Meanwhile, Tim, Maya, Paula, Karen and George correctly fear that layoffs are coming (♫ Who's The New Guy? ♫). Later, Rebecca apologizes to Josh for cancelling their plans as she has to now search for wealthy clients.

She is embarrassed when Josh, at Maya's request, replaces the water cooler bottle amusing Nathaniel. Rebecca moves her things out of her old office, now occupied by Darryl, into a cubicle next to Paula's desk and tries to reassure her friend about the future. Over at Home Base, Darryl has lunch with Nathaniel and suggests a softer touch when managing the firm. Nathaniel considers this and reveals that he bought shares of the firm from Darryl's ex-wife and is now the majority owner of Whitefeather and Associates. Later, Rebecca works after hours trying to drum up business and discovers Nathaniel is there too making a list of employees he's going to fire. As they banter, Rebecca recieves a message from potential clients who schedule a meeting.

When she goes home Rebecca annoys Josh by complaining about Nathaniel. The next day at the firm, Rebecca reminds Darryl about the upcoming meeting and finds him with WhiJo who is comforting him about his recent business decisions. Later, Rebecca makes a pitch to Whitworth and Stonebrow, the owners of a country club. She has an idea to dismiss a lawsuit filed against them by a neighboring cemetery. The potential clients were impressed but afterwards Nathaniel points out they didn't sign a contract. He reminds Rebecca about the deadline he set and summarily fires George to prove he is serious (♫ George's Turn ♫). That evening Rebecca has dinner with Josh and his parents at a fancy restaurant when Nathaniel shows up.

His prescence ruins her dinner as she can't stop thinking of his criticisms of Josh causing her to snap at her boyfriend. After making a scene in front of his parents an embaressed Rebecca leaves and joins Paula on a late night caper. They are investigating the graveyard in order to secure a contract with the country club. Paula proves Rebecca’s theory correct when she digs up a grave and finds evidence they are burying more than one body in the same plot. They are interrupted by the security guard causing Rebecca to run off and abandon Paula. It's morning by the time Paula returns to her car where she finds an apologetic Rebecca. At Rebecca's insistence they head straight to the law firm so they can tell Nathaniel about their discovery in the hopes it will appease him.

However, Nathaniel is not satisfied with their findings and still intends to fire employees. Rebecca asks to speak with him in private and in the boardroom she pleads with Nathaniel to reconsider. When he responds by insulting both her and Josh, Rebecca chases Nathaniel around the room with a pen. As the staff watches them struggle, Whitworth and Stonebrow show up. Once Rebecca and Nathaniel compose themselves, they are told by the country club owners that the cemetery has dropped their lawsuit. They suspect her part in that and officially hire the firm prompting Nathaniel to tell the staff their jobs are safe for now. Later that night at home, Rebecca apologizes to Josh for her actions. She then suggests they role play with her chasing him with a pen.

Retrieved from "https://cxg.fandom.com/wiki/When_Do_I_Get_to_Spend_Time_With_Josh%3F?oldid=17595"
Community content is available under CC-BY-SA unless otherwise noted.