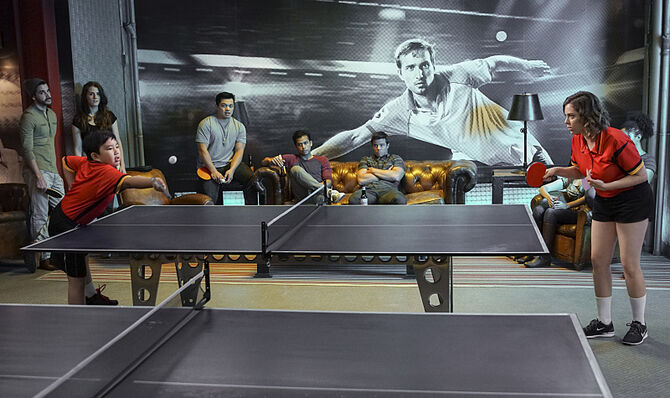 When Will Josh See How Cool I Am?

Greg is at his Alcoholics Anonymous meeting telling the group about his first drink. Afterwards, Greg gets a warning from his sponsor Guardrail that although he seems in a good place now it's a phase and tough times are ahead. Greg feels he's doing fine and even volunteers to get the donuts for the next meeting. At Rebecca's apartment, she has a meal ready for Josh when he got home only to find out he already ate. They hadn't seen much of each other the last few days and Rebecca tries to figure out a way for them to spend time together. She finds an in when Josh mentions that he's going to a new Ping Pong bar called "The Paddle" on Friday. He invites Rebecca after she lies that she's an expert Ping Pong player.

The next day Rebecca is at work researching online how to become a great ping pong player. Paula walks into her office and tells Rebecca she's enrolling in law school. Rebecca is happy for her friend and agrees to give Paula a letter of recommendation by Friday. When Paula leaves she considers that this time her dream might actually come true (♫ Maybe This Dream ♫). Later, Paula declines Darryl's offer to write her a reference letter. A kid named Xiao Huang walks into the office and identifies himself as a junior table tennis champion. Rebecca hired him to teach her the game and takes him to the conference room. Upon hearing her motivations Xiao is skeptical of Rebecca's plan to impress Josh.

At Home Base, Greg has returned to work and gets support from both Kevin and Heather for dealing with his addiction. Josh, Hector and White Josh arrive at the bar having been asked to come by Greg. He invites them to a table where Greg tells his friends about his DUI arrest and subsequent rehab for his alcohol addiction. Greg assures them it's his problem not theirs and gives a brief history of how drinking has affected him (♫ Greg's Drinking Song ♫). Afterwards at Cup of boba, Josh discusses this recent development with Father Brah. He is shocked when Brah agrees that Josh shouldn't tell Greg about him and Rebecca. Coincidentally, Greg shows up with Heather which Brah points out to Josh.

Josh goes over to say hello after Greg makes an apology to Heather as part of his twelve step program. His guilt causes him to blurt out he is sleeping with Rebecca and also living with her. Greg takes a moment to processes the information but ultimately seems okay with it. Heather worries Greg is repressing his true feelings but he tells her he's fine. However, when he goes to work Greg walks into the back room and punches a wall. At Whitefeather & Associates, Paula reminds Rebecca about the letter and gets assurances she'll meet the deadline. Rebecca continues her training with Xiao who compliments her slight improvement. She then imagines how impressed Josh will be by her ping pong skills (♫ Ping Pong Girl ♫).

That night at "The Paddle" Rebecca has an exhibition match with Xiao that displays her obvious lack of talent to Josh, Hector and White Josh. Meanwhile at the Proctor residence, Paula admits her anxieties to Scott about going back to school. Over at the East Cameron AA meeting Guardrail is disappointed that Greg hasn't shown up with the donuts he promised. At the same time, Hector mentions he invited Greg to the bar and wonders why he hasn't arrived yet. Josh is also concerned in light of his confession which angers White Josh who wasn't aware of Rebecca and his friend's relationship. Hector and White Josh go out to look for Greg but it's Rebecca who finds him alone sitting on a park bench.

She apologizes about her and Josh but couldn't tell Greg sooner since he went missing. Greg explains his month long disappearance was due too his embarrassment. Ironically his DUI was the morning after thier wedding date when he was driving over to tell Rebecca he loved her. Greg admits he messed up but is fine with Rebecca being with Josh as long as she's happy. They are interrupted by Xiao who needed a ride home. The next day Rebecca missed the deadline for Paula's letter but tells her friend she fully supports her. That night she thinks about Greg and is upset when Josh is insensitive to his friend's plight and her own feelings. She then goes to bed while clutching Greg's Emory sweatshirt.

Retrieved from "https://cxg.fandom.com/wiki/When_Will_Josh_See_How_Cool_I_Am%3F?oldid=16408"
Community content is available under CC-BY-SA unless otherwise noted.