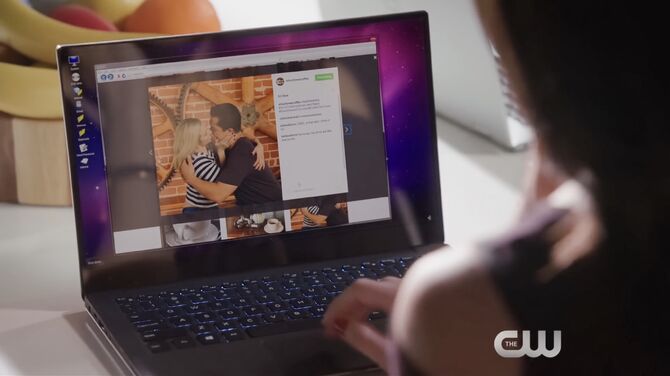 At Whitefeather & Associates, Paula is at her desk redecorating it to better reflect her new law school obsession. After their recent argument Rebecca at first ignores Paula, then tells her she refuses to apologize and finally pleads for them to make up. Paula is reluctant as she's unsure the issues between them can be easily resolved. Later at the Proctor residence, Scott is preparing for a barbershop quartet performance. He's nervous as it's for an office party at his warehouse but Paula doesn't notice as she's distracted by her studies. When he learns sheand Rebecca are still fighting Scott encourages Paula to try and fix things with her. Over in Los Angeles, Josh meets with new girlfriend Anna at a trendy coffee shop.

After ordering coffee, Josh gives Anna a gift for her pet cat Gravy and they take selfies together which they post on Instagram. Back at West Covina in Rebecca and Heather's house, the Gurl Group is hanging out. They are all focused on their laptops looking up things online. Both Valencia and Rebecca notice Josh's activity on Instagram and are upset to find out he's in a relationship. Heather warns them not to research Josh's new girlfriend as it'll turn into an obsession. The two ignore her advice and start stalking Anna on social media for three days straight and learn she's a successful beauty mogul (♫ Research Me Obsessively ♫). They are incredulous someone hip and successful like her is interested in Josh. Rebecca and Valencia decide to team up to figure out her true motivations.

At Scott's workplace, his co-worker Tanya tells him she's looking forward to his barbershop quartets performance at the office party. Over in Silver Lake, Rebecca and Valencia find Anna's Eyebrow salon and hide when she walks outside. They eavesdrop as Anna talks to a client on the phone about a shipment. They then observe a customer exiting the salon with a pouch of white powder. The duo return to Rebecca's car and jump to the conclusion that Anna's a drug dealer. They decide to tell Josh but when Rebecca starts driving she hits Anna's pet cat Gravy. When Anna runs out and asks the pair who did this they lie and say it was a hit and run. Much to Valencias dismay Rebecca offers to drive Anna and Gravy to the Veterinarian clinic.

Once there, Rebecca and Valencia hide their identities by calling themselves "Madge and Allegra". They try to interrogate Anna by pretending to ask her questions from a form but are interrupted when the doctor tells them Gravy is okay. When Anna mentions the collar Josh gave her cat Rebecca seizes the opportunity to ask about him. Anna reveals they haven't been dating long but he's already helping her business out by getting a particular product from Mexico for her. She mentions he had two exes; one hounded him to propose for years and the other was so crazy she moved across country to stalk him and once begged him for sex while she was on her period (♫ Period Sex ♫). Anna also mentions she'll find out who hit Gravy as her salon has surveillance cameras which recorded the incident.