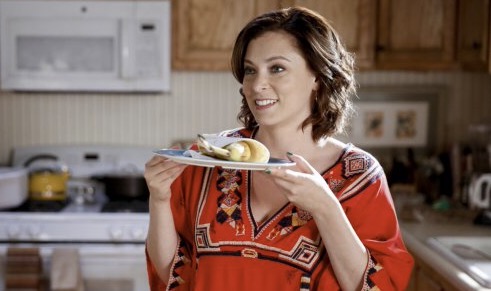 Who Is Josh's Soup Fairy?

At the Proctor residence, Scott and Paula see to it that Brendan and Tommy are ready for school. Once their kids leave, Scott confesses to Paula he got drunk the night before and slept with his co-worker Tanya. Paula calmly tells Scott to move out of the house and internalizes her anger. It's later at law firm that she lets out her feelings by loudly berating Tim for failing to refill ice cube trays in the break room. Rebecca and Mrs. Hernandez follow when Paula runs crying to the boardroom. Mrs. Hernandez verbally chastises Rebecca who tries to make this all about her. Paula tells her friends she threw Scott out after he admitted to an affair. She worries that without him she wont be able to handle her children. Paula laments that a Law school class field trip to Sacramento over the weekend is now out of the question.

Across town, a somewhat under the weather Josh is showing Anna around West Covina and takes her to the latest hang out Sugar Face. He invites her to an upcoming event at the nightclub Spider's but Anna declines as she's going to be busy at the salon. At the Proctor residence, Paula tries to get her boys ready for school only to learn that Brendan has left on a cross country excursion. Rebecca arrives and volunteers to look after Tommy so Paula can go on her field trip. She apologizes for having taken Paula for granted and wants to make up for her selfishness. Although reluctant, Paula agrees and leaves Tommy in Rebecca's care for the weekend. Rebecca is at first extremely confidant about her ability to take care of Tommy (♫ So Maternal ♫). However, twelve hours later she is exhausted by her domestic duties.

Rebecca takes Tommy to the grocery store to pick up a few things where she runs into Josh. She apologizes for their last encounter and they agree to remain friends. Rebecca later has chicken soup sent to Josh since he admitted he wasn't feeling well. At Aloha Tech Center, Alex gives Josh the soup Rebecca ordered for him which he believes is from Anna. Meanwhile, Rebecca is lecturing Tommy when she's interrupted by a notification she recieves on her phone from Josh's Instagram account. She is upset upon seeing it's a post of Josh with the soup thanking Anna for it. Rebecca learns Josh is going to be at Spider's and takes Tommy with her to the club so she can let Josh know the truth. Over at the nightclub, Heather is making an appearance as the new "Miss Douche" spokesmodel.

Hector and WhiJo are there as well at Josh's request who hints at something special to come. Rebecca and Tommy also show up and manage to get into the club as does Anna who surprises Josh. When Rebecca spots her Josh and his new girlfriend together she hides to avoid Anna but loses track of Tommy. A panicked Rebecca recruits Heather to help her find Paula's son and gets a clue to his whereabouts by checking Tommys Instagram account. They head to the clubs restroom where Tommy took a selfie he posted but find he's already gone. Rebecca and Heather are forced to hide in a stall after Josh and Anna burst into the restroom for a brief tryst. Once they leave Rebecca and Heather continue their search while Anna joins Hector and WhiJo at a table to await Josh's surprise.

They are mortified to see him appearing in a low brow fashion expo and watch as Josh makes a spectacle of himself. During the show Rebecca is distraught that she and Heather are unable to locate Tommy. Later, Josh finds Anna who was so repulsed by his performance she dumps him. Before leaving Anna reveals she didn't send him chicken soup and Josh is consoled by WhiJo. Hector looked into the soup order and learned a lengthy card with a Shakespearean quote was attached. WhiJo figures out it was from Rebecca and Josh decides that she's the one he's meant to be with (♫ Duh! ♫). Meanwhile, Rebecca returns alone to the Proctor residence only to discover Paula decided to come home early. Rebecca is relieved to find out Tommy made it home safely and corroborates a cover story he made up.

As Paula praises her friend's reliability Josh shows up at the house to see Rebecca after having run there all the way from the club. Josh tells her the soup made him realize Rebecca truly cares for him and asks her if they can go somewhere to talk. Rebecca is hesitant causing Paula to interrupt and insist that she go. Unexpectedly Rebecca decides to put Paula first and tells Josh to leave which he does but not before declaring he won't give up on them getting back together. Rebecca then comes clean about what really happened with Tommy but Paula is unconcerned about it. Instead she points out how Rebecca decided to stay and own up to her mistakes rather than running off with Josh. Feeling that she has truly proven her friendship Paula forgives Rebecca and the two officially reconcile.

Retrieved from "https://cxg.fandom.com/wiki/Who_Is_Josh%27s_Soup_Fairy%3F?oldid=15218"
Community content is available under CC-BY-SA unless otherwise noted.