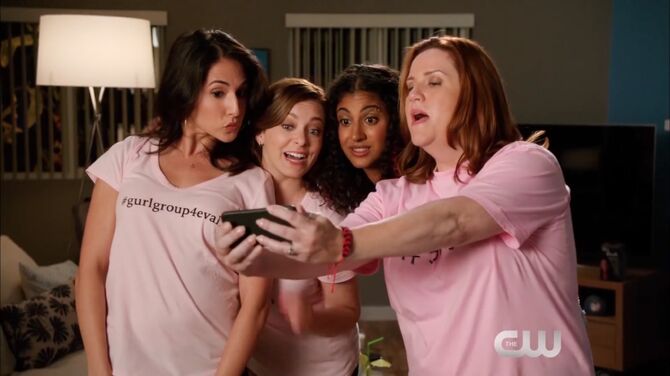 Who Needs Josh When You Have a Girl Group?

At Home Base, Rebecca is enjoying her newly formed close circle of friends with neighbor turned roommate Heather and her former rival for Josh's affection Valencia Perez (♫ Friendtopia ♫). At work, she incorrectly believes Paula is feeling left out ignoring Darryl who actually does want to be a part of her crew. Rebecca invites Paula over ostensibly for some alone time together at her new place. In reality she set up a ladies sex toy party hosted by Karen instead. She hoped to integrate Paula into the "gurl group" and had Heather and Valencia show up.

Meanwhile, Rebecca's former Harvard classmate Trent Maddock is back in town with a plan to win her affections. He brags to a salesperson he's purchasing typical "SoCal bro" clothes about his scheme. It involves infiltrating Josh Chan's crew so he can become a part of Rebecca's social circle. He later goes to Aloha Tech Center to see Josh and invite to join him at Home Base. He offers to pay for Kevin's new expensive cover charge and watch the game at a table he got for clients. Josh agreees and as expected Josh brings his friends White Josh and Hector along. The night goes poorly as the crew finds Trent to be weird and off putting.

At the same time Maya and Darryl form an alliance to force their way into Rebecca's party. At Rebecca's house, Paula is annoyed at having been tricked and doesn't integrate into the group as planned. She goes to the bathroom and gets stuck inside when the door doesn't open. Rebecca kick it in only for a section of the ceiling to collapse blocking the doorway and trapping Paula. After some hesitation (♫ Stuck in the Bathroom ♫), they call emergency services. Paula tries to convince Rebecca not to look at her phone when she attempts to use it. Rebecca sees the text messages Paula sent and is angered.

She learns Paula hated the party and called her new friend Sunil Odhav to show up with a fake emergency to rescue her. Sunil showed up as expected with an excuse only to be surprised by the tableau he walks in on. His entrance is followed not long after by Trent who declared his love for Rebecca. When Trent saw Paula was trapped he managed to lift the debris to free her. Rebecca and Paula then got into an argument about how one sided thier friendship is. Paula told her the way thier relationship is set up she couldn't even confide in her that she had an abortion stunning Rebecca with the revelation. Although shocked by the news Rebecca is just as upset at Paula since she didn't tell despite her asking if anything was wrong.

The tension is broken when Darryl and Maya then show up and perform a dance routine they rehearsed at the office (♫ We Gone Keep it Rollin ♫). Afterwards, Trent talk to a dejected Rebecca in her room and comforted her. At a low point due to her falling out with Paula, Rebecca propositions Trent and they have sex. The next day Darryl and Maya's dance became popular after it was uploaded on YouTube. They embrace their minor celebrity to their co-workers in the break room. George asks them to perform the dance so he can learn it and they eagerly comply. Meanwhile, Rebecca and Paula are still upset and refuse to talk to each other.

Retrieved from "https://cxg.fandom.com/wiki/Who_Needs_Josh_When_You_Have_a_Girl_Group%3F?oldid=15216"
Community content is available under CC-BY-SA unless otherwise noted.