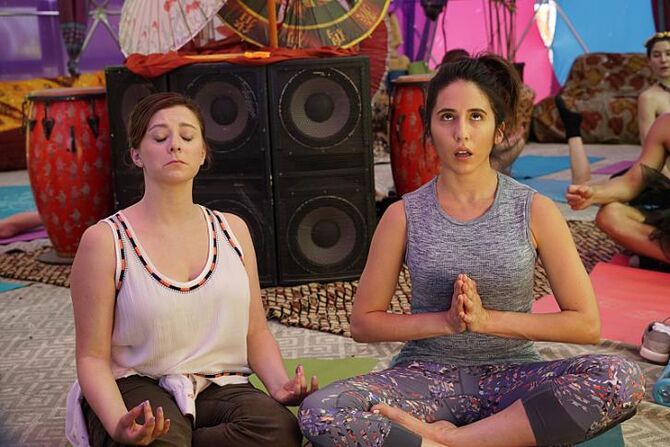 Why Is Josh's Ex-Girlfriend Eating Carbs?

At the Sugar Face doughnut cafe, Rebecca discusses with Heather a feminist tome called "Blood and Lice". It's about about bonding on a primal level which Rebecca feels she and Valencia need to do to get over their break ups with Josh Chan. Heather is skeptical about the idea since Valencia hates Rebecca. The next day at Paula's Law school, Rebecca shows up to class to support her friend. After she leaves Paula bonds with a classmate named Sunil Odhav, the father of two and a recent widower whose wife committed suicide. Meanwhile Rebecca goes to Valencia's apartment and barges in adamant that they should bond. She finds the place is in dissary and Valencia overeating. Rebecca tries to give her the Blood and Lice book insisting they reconnect due to their mutual romantic troubles.

Valencia refuses explaining the difference regarding Josh is that she chose to end things while Rebecca was a rebound. When Rebecca points out Valencia's obvious depression she is kicked out. Over at the Aloha Tech Center, Josh came in early to organize the backroom. His boss Alex suggests it's a distraction because Josh is a "girlfriend guy" who has trouble being alone. However, Josh is in denial and gets lost in his own thoughts (♫ Thought Bubbles ♫). Elsewhere, Rebecca is at the break room at work when WhiJo shows up. Her boss Darryl Whitefeather and his boyfriend are going to the annual San Gabriel Valley version of Burning Man known as Electric Mesa. Rebecca is inspired by a brochure of the event Darryl and goes back to Valencia.

She tricks Valencia into thinking they are going to Dairy Queen but in reality Rebecca drives her to Electric Mesa. Valencia reluctantly agrees to stay worn down by Rebecca's pestering and because she has nothing else better to do. Meanwhile, Darryl and White Josh are there as well setting up camp when they run into an old friend of Wilson's named Carl. At the law school, a classmate is rude to Paula and Sunil after they ask what kind of note taking app he is using. Back at the festival, Rebecca and Valencia are partaking in a group sesnsory meditation session. Rebecca can't focus and instead annoys her companion with questions about Josh prompting Valencia to complain to Sherpa Allen. Also at the session is Darryl who is upset when he learns WhiJo and Carl used to date.

When the speaker system shorts out the Aloha Tech Center is contacted and Alex sends Josh out for a service call. At the Law school, Sunil and Paula plan a caper to get their classmate's note taking app. Meanwhile, when Valencia tries to leave Electric Mesa Rebecca convinces her to stay and have drink which turns out to be laced with the drug "Triceratops". A hallucinogenic experiences follows which involves Josh (♫ Triceratops Ballet ♫). Coming down from their high Rebecca is angry that he took advantage of her and Valencia admits she and Josh were done before she dumped him. They are shocked when they see Josh arrive to fix the festivals sound system. Elsewhere, Darryl is upset to find out his boyfriend dated several guys at the festival and that he is specifically attracted to older men.

At the same time Rebecca and Valencia watch as Josh soaks in the adulation of the crowd after repairing the sound system. Rebecca drags Valencia to the electronics tent and convinces her to pee on Josh's equipment to get back at him. Over at the Law school, Sunil and Paula break into thier classmates dorm room and download the note taking app from his laptop. At Electric Mesa, Josh catches his exes in the act but they are unaplogetic and verbally lambast him for how poorly he treated them. As Rebecca and Valencia start to compliment each other Josh sneaks out. Later, Rebecca runs into Darryl and suggests he just talk honestly with WhiJo. Darryl finds WhiJo and admits his insecurities about not being as interesting as the other men he dated.

Wilson reveals his own worries that he's a fling to Darryl and questions why he hasn't met his boyfriend's daughter Madison yet. Darryl assures him he takes WhiJo seriously but didn't want to pressure him. They both confess they want to take the relationship to the next level. Elsewhere, Josh loads his equipment onto his van with Sherpa Allen's help. Although his encounter with his exes made him swear off women he is approached by an attractive female who thanks him for saving the festival. After returning home Darryl sets up a meeting between Madison and Wilson at Cup of boba that goes well. Over at Sugar Face, Rebecca re-introduces Valencia to Heather and runs into Paula who is with Sunil. At the Aloha Tech Center, Josh contemplates contacting the woman he met (♫ Thought Bubbles (reprise) ♫).

Retrieved from "https://cxg.fandom.com/wiki/Why_Is_Josh%27s_Ex-Girlfriend_Eating_Carbs%3F?oldid=15215"
Community content is available under CC-BY-SA unless otherwise noted.