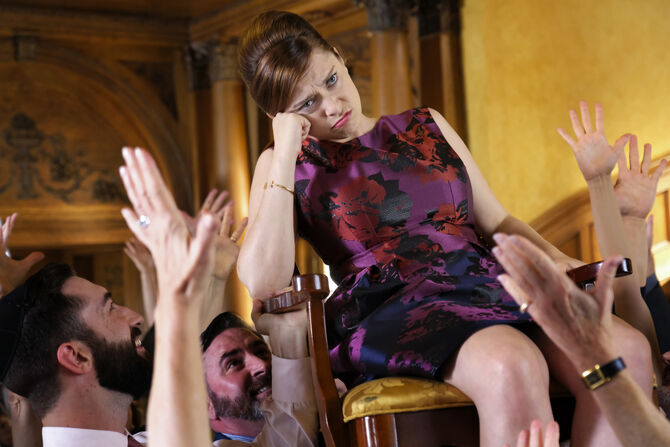 Rebecca and Josh are at her house getting ready for a trip to Scarsdale for her cousin's Skylar's Bar Mitsvah. As they prepare they update their various social media accounts to reflect thier relationship status. Heather theorizes their overt PDA online masks insecurities they have about the relationship but Josh and Rebecca deny this (♫ We'll Never Have Problems Again ♫). At Whitefeather & Associates, Darryl fails to impress Nathaniel while Rebecca tells her boss about her trip back home. Later Rebecca stops by to see Valencia at Sugar Face. Valencia admits she’s not completely okay with Rebecca being with Josh and warns her that he’s not as great as she thinks he is.

At Our Lady of West Covina, Josh confesses to Father Brah he’s worried about the trip. Brah suggests Josh is trying to define himself through his latest relationship. After a long flight, Rebecca and Josh arrive at the Bunch residence where a scantily clad Naomi Bunch greets them and creates an awkward atmosphere. Back at the firm, Darryl finds out from Maya and a re-hired George that Nathaniel is excluding him from working a big case. He goes to the break room to indulge in candy only to learn from Jim that Nathaniel removed unhealthy snacks. In Scarsdale, Naomi interrupts Rebecca and Josh getting intimate. The following morning Rebecca wakes up to find Naomi and Josh have bonded (♫ Period Sex ♫).

Later at Skylar’s bar mitzvah after party, Josh is having a good time while Rebecca is in a foul mood even after a warm greeting from her old rabbi Shari. A reunion with Rebecca Audra Levine makes the situation worse as does Josh becoming fast friends with her frenemy’s husband David. Rebecca tries to explain to Josh how bad life is in Scarsdale while a hora is being performed (♫ Remember That We Suffered ♫). She is upset when Josh points out the only person who is miserable at the party is her. Back in West Covina, Nathaniel learns Darryl disobeyed his orders about snacks in the break room. However, he backs down from punishing Darryl when the entire office staff comes to the defense of their former boss.

Back at Scarsdale, Rabbi Share finds Rebecca sitting alone depressed that her plan to make Josh see how terrible her hometown is failed. Shari suggests that her dislike of her own culture means Rebecca actually hates herself. Rebecca hoped being with Josh would make her happy but Rabbi Shari points out that’s a ridiculous fantasy. In West Covina, Nathaniel learns from his father that the firm didn’t get the big account. Minutes later Darryl finds Nathaniel furiously running on the treadmill after having binged the snacks he confiscated. When he ups the setting on the machine Nathaniel slips and falls breaking a tooth. At the dentist office Nathaniel and Darryl bond over having terrible fathers.

The next day in Scarsdale, Josh notices Rebecca is still upset and asks Naomi’s advice on how to smooth things over. In West Covina, Darryl is surprised when Nathaniel asks him to help out on an important clients case. Meanwhile over at Dr. Akopian's office, Rebecca tells her psychiatrist she’s rethinking her idea that the perfect romance will make her happy. Rebecca wants to get to the root of her personal mental issues which excites Akopian. However, their session is interrupted by the arrival of Josh Chan. He had just gotten Rebeccas Garfinkel ring out of hock and over Akopian's objections proposed to his girlfriend. Rebecca enthusiastically accepts leaving Akopian frustrated.