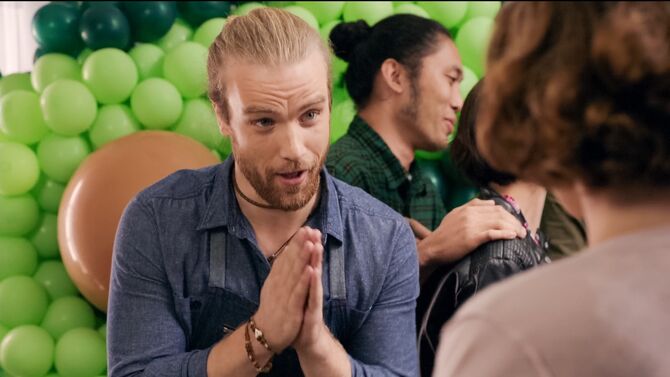 Xander is a resident of the Central Los Angeles area just West of the San Gabriel Valley, hailing from the neighborhood of Echo Park. He is a proud vegan and Guacamole enthusiast who had a brief fling with Rebecca Bunch. Xander competes in local Guacamole competitions representing his restaurant "Echo Parko Tacos". His first appearance was in the Season One episode "I'm Going on a Date with Josh's Friend!". He is portrayed by actor Thor Knai.

In October of 2015, Xander and five other employees from Echo Parko Tacos traveled from Echo Park to West Covina to compete in the annual Taco Festival guacamole competition. He and his group made it into the finals against the team representing the popular West Covina Mexican restaurant La Cocina. The last round took place in a tent as a large crowd gathered to participate in crowning a champion. After the emcee announced both teams, the public tried sampling both teams' Guacamole dips. One of those people was Rebecca Bunch who asked Xander if his version was vegan.

Xander replied that not only was it vegan but free of GMO's, certified organic and added that the avocados were cruelty free. He asked if she was vegan, and Rebecca told him she'd only been at it for two days. While she loves the lifestyle and remains committed to it she adds she can't stop thinking about eating meat. Xander offered his sympathies and shared with her that he could really go for some Burger King at the moment. Before she left with a sample of his guacamole she promised to keep his secret.

Afterwards, Xander caught Rebecca eating a pork taco at the festival. He promised her secret was safe with him and she unexpectedly invited hi back to her place. The two had sex but not before Rebecca made him wear two condoms. Post coital he asked her if she finished and Rebecca said she did a bunch of times. Afterwards, Rebecca asked Xander to leave and on his way out he wanted him to know if he should call or text her. She told him to take the hint and Xander responded he would contact her through LinkedIn before leaving the apartment ("I'm Going on a Date with Josh's Friend!").

The following year Xander made an appearance in Rebecca's imagination when she was in a depressed state. At the time she had just been rejected by both of her ex-boyfriends Josh Chan and Greg Serrano. While in her apartment she imagined that her two exes were performing a musical tap dancing number and mocking her. In the song they were listing all the places in her home where they had sex with her (♫ We Tapped That Ass ♫). At one point Xander showed up and briefly joined in on the performance. He too mentioned how he had sex with Rebecca in various places in the apartment, much to her disgust ("When Will Josh and his Friend Leave Me Alone?")

Retrieved from "https://cxg.fandom.com/wiki/Xander?oldid=15523"
Community content is available under CC-BY-SA unless otherwise noted.